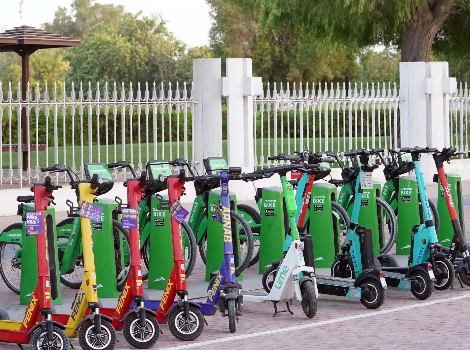 Dubai’s Roads and Transport Authority (RTA) is ramping up the awareness campaigns and inspections on the four RTA-approved operators of e-scooters. The campaigns were initiated at the start of the service rollout and are still on the go.

“The awareness campaigns and inspection of RTA-appointed e-scooter operators in Dubai have significantly contributed to the delivery of safe, smooth and enjoyable services to users from all spectrums of the community,” said Muhannad Al Muhairi, Director of Licensing Activities Monitoring, Licensing Agency.

“The awareness materials include an explanation of violations of the Administrative Resolution No 1015 for 2021 regarding the violations of e-scooter operators, briefing about the approved identification card for practicing the activity, technical specifications of electric scooters (such as headlights, rear lights, steering wheel horn, front and rear reflector, front and rear brakes, the speed limit of 20 km per hour), and the commitment to using only the stations designated by RTA and avoiding setting up any other station not approved by RTA. The list calls for redistributing electric scooters in use to limit the occurrence of violations such as: parking e-scooter on the sidewalks outside the parking spaces specified by RTA, parking the e-scooter in a way that hinders the movement of pedestrians or users of individual means of transportation, and parking the e-scooter on streets or in the middle of the right-of-way for vehicles.

RTA has reported several recurrent violations on the part of e-scooter operators such as the failure to comply with RTA’s circulars and instructions, the use of parking and places outside the approved operational zones, and the failure to place identifying labels, logos or colours assigned to the facility in the specified places or on both sides of the e-scooter.

The Traffic Department of RTA’s Traffic and Roads Agency had issued circulars and instructions to e-scooter rental companies calling for full compliance with the regulations and laws for the safety of electric scooter users and other road users.