(Al Tayer: The project serves a host of urban projects inhabited by 650,000 residents) 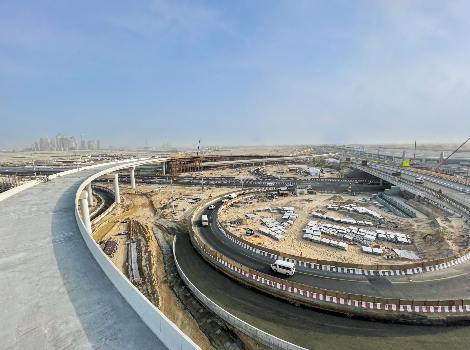 Dubai’s Roads and Transport Authority (RTA) announced that 75% of the construction of Sheikh Rashid bin Saeed Corridor Improvement is completed. The project extends 8 km along Ras Al Khor Road from the intersection of Dubai-Al Ain Road to the intersection of Sheikh Mohammed bin Zayed Road. Works include constructing bridges extending 2 km, widening Ras Al Khor Road from three to four lanes in each direction, and building two-lane service roads on both sides.

“RTA has also constructed a new 1.5-kilometre road of four lanes in each direction along with entry and exit points to and from the newly completed areas and buildings to facilitate the movement of traffic inbound from Nad Al Hamar-Ras Al Khor Roads intersection.

“The new roads and bridges network contributed to streamlining the traffic flow to the newly completed housing units at Dubai Creek, by linking them with the surrounding roads. The new roads were also fitted with a lighting network of 108 streetlight poles. Works are currently underway in the construction of a 640-metre bridge to ensure a smooth traffic movement from Dubai Creek Harbour project towards Ras Al Khor Road with a capacity of about 3,100 vehicles per hour,” explained Al Tayer.