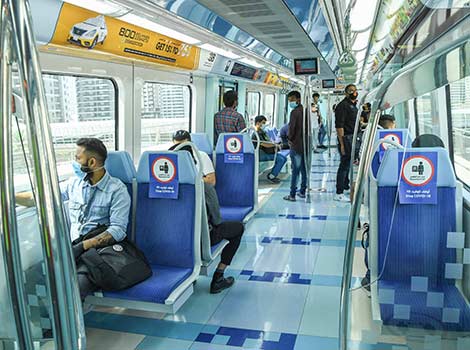 Dubai’s Roads and Transport Authority (RTA) hailed the riders of the Dubai Metro and Tram riders for maintaining the safety and cleanliness of the cabins and facilities of these vital mobility means and Dubai’s public transport in general. The Dubai Metro and Tram account for as much as 52% of the total ridership of public transport in Dubai (excluding taxis). These two means are particularly important for the movement of participants in events, conventions and exhibitions, such as the upcoming global showpiece, Expo 2020, which will kickstart on Oct 1st, 2021 and end on March 31st, 2022.

“The dedicated metro and tram teams undertake continuous awareness campaigns urging riders to comply with the safety standards as well as the precautionary measures to maintain the public health and halt the spread of the Covid-19 pandemic,” said Hasan Al Mutawa, Director of Rail Operations, Rail Agency, RTA.

“These monitoring and inspection campaigns on the facilities and trains of the Dubai Metro and Tram are not aimed at issuing tickets to violators. They rather stem from RTA’s standing commitment to apply the top global practices for ensuring the safety of riders and the cleanliness of mass transit means. These means contribute to the profile of Dubai as a global and regional hub for investments, businesses and services.  Achieving these safety standards is credited to the cooperation of the public, efforts of teams at site, and the continuous awareness campaigns,” continued Al Mutawa.

“The most significant three violations reported since the start of this year were topped by accessing or sitting in areas designated for specific categories, which recorded a total of 856 violations. Next came the use of public transport facilities and services, or entry/exit of fare zones without paying the applicable fare, which amounted to 107 violations. The third was eating and drinking in prohibited areas, which reported a total number of 79 violations,” explained Al Mutawa.

“Maintaining the safety and cleanliness of the metro and tram is not just the responsibility of RTA’s teams, it is rather shared by all riders who have to keep the cabins and iconic stations of the Dubai Metro and Tram clean and gorgeous. Such compliance will contribute to the fruition of RTA’s vision to become ‘The World Leader in Seamless & Sustainable Mobility,’” concluded the Director of Rail Operations, Rail Agency, RTA.