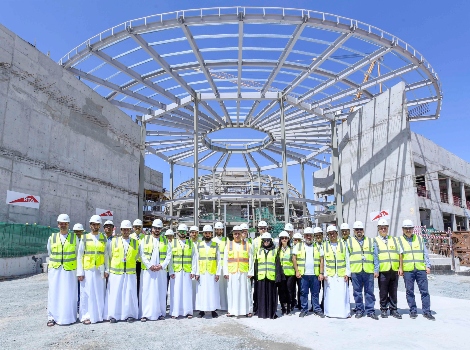 HE Mattar Al Tayer, Director-General and Chairman of the Board of Executive Directors of Dubai’s Roads and Transport Authority (RTA), announced that work completion on the  expansion of RTA’s Smart Traffic Systems Project has reached 23%
The Project is undertaken under the implementation of the directives of HH Sheikh Mohammed bin Rashid Al Maktoum, Vice-President and Prime Minister of the UAE and Ruler of Dubai, to broaden the scope of smart traffic systems in support of  ranking Dubai as the smartest city worldwide. Hence, it entails using smart technologies to ease people mobility in Dubai.

Al Tayer made such announcement following a recent tour to the site of the new Traffic Control Centre at Al Barsha, which is intended to expand the coverage of Dubai roads by smart systems network from the present 11% to 60%, and cut the time of detecting accidents and congestions build-up on roads and ensure quick response. It will also provide instant traffic information to the public about roads condition via new Variable Messaging Signs and smart apps, and enhance the efficient management of traffic movement during major events, such as Expo 2020.

Al Tayer was briefed about the progress of building the new control centre; which comprises four divisions: traffic control centre, two wings for support offices and the reception lounge connecting the four divisions. It also has an attached utility building for electricity and air-conditioning units. The progress rate in the Centre’s building has clocked 26% as the building structure has now been fully completed and work started in the cladding and electromechanical works.

He also inspected the progress of work in the five main areas of the project. The first covers traffic monitoring & data capturing systems. It involves the installation of 116 cameras, 100 Radar Vehicle Detection Systems (RVDS), 114 Bluetooth devices, and 17 Road Weather Information Systems (RWIS).
The second  relates to information signs (dynamic messages); which involves the installation of 112 signs providing instant information to drivers about the road condition. The third involves constructing the infrastructure of civil works such as fibre optic lines, and electricity distribution network. These works involve the extension works spanning about 400 km. The fourth covers the advanced central traffic system. The system supports decision-taking, ensures an automatic response, and enables the integration with devices at the site as well as other traffic centres and operations.

The fifth part covers constructing the building of the Traffic Control Center featuring a state-of-the-art design of control rooms fitted with devices such as giant screens as well as user-friendly & efficient control systems for use by operators & engineers.

“This project is part of the deliverable of the Innovation Lab (RTA Route 2030) endorsed by HH Sheikh Mohammed bin Rashid Al Maktoum. It entails upgrading and expanding the smart traffic systems in Dubai by providing an integrated infrastructure of smart traffic systems in the Emirate and constructing a new traffic management centre at Al Barsha. Upon completion, the project will ease the management of traffic bottlenecks and accidents, enhance the safety of road users, and ease personal mobility, thanks to the use of sophisticated technologies,” concluded Al Tayer.