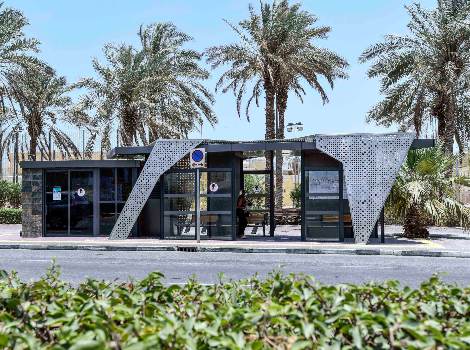 Dubai’s Roads and Transport Authority (RTA) has unleashed a new generation of bus shelters at four hotspots across the city. The shelters boast of an innovative design that had been endorsed by His Highness Sheikh Mohammed bin Rashid Al Maktoum, Vice-President and Prime Minister of the UAE and Ruler of Dubai. It is the first batch under a plan for constructing 1550 shelters for waiting bus riders set to be constructed over 3-4 years.

“The project is being undertaken in partnership with the private sector through Build–Operate–Transfer (BOT) Model. The investor shall cater to the funding of construction and operation of shelters, and share the proceeds of advertisements with RTA under a 12-year contract. Through this project, RTA avails the private sector a long-term investment opportunity and the chance to develop smart and innovative services to users. It also diversifies RTA’s revenues and serves key objectives of Public-Private Partnership (PPP). RTA received six proposals from local and international investors, and four firms passed the technical and financial assessment,” said His Excellency Mattar Al Tayer, Director-General and Chairman of the Board of Executive Directors of RTA.

“The new design of bus shelters is part of a package of vital projects endorsed by His Highness Sheikh Mohammed bin Rashid Al Maktoum that bolster the image of Dubai as a perfect city for stable and safe living. The initiative is coherent with the vision of our leaders that calls for adopting the PPP model as a pivotal tool for stimulating the growth and development of Dubai.

“The new shelters serve the needs of highly populated areas of the emirate and cater to the current and future needs of public bus services. They feature a stylish modern design that forms a blend between a practical interior and dazzling exterior, besides utilising the constructional elements to serve and form part of the architectural design of shelters.

“The construction of shelters is part of RTA’s ongoing efforts to upgrade the public transport sector and set up a robust and integrated infrastructure to rely on. The overall aim is to serve the wellbeing of Dubai residents and make them happier through offering them, especially bus riders, handy services during the scorching summer heat,” added Al Tayer.

“The design of the new bus shelters conforms to Dubai Code for People of Determination as they make room for wheelchairs and tracks for visually challenged individuals. It consolidates “My Community ... A City for Everyone” initiative of His Highness Sheikh Hamdan bin Mohammed bin Rashid Al Maktoum, Dubai Crown Prince and Chairman of the Executive Council, aimed at transforming the entire Dubai into a friendly city for people of determination by 2020. It also marks an endeavour of RTA to add happiness to this community segment,” explained Al Tayer.

“The new bus shelters project is part of RTA’s phenomenal projects depicting the gorgeous landscape of Dubai. It encourages community members to use public transit means, which will contribute to realising RTA’s strategic objective of boosting the ridership of mass transit means in Dubai. RTA will continue with development projects to support the urbanisation and demographic expansion of the Emirate. Improving the public transport services will offer residents and visitors a safe and smooth mobility experience all over the Emirate,” noted Al Tayer.

Part of shelters in main stops will be air-conditioned, and other parts will be shaded along with space for branding. Shelters will also have informational screens displaying bus network, timetable, service frequency and other information needed by bus riders. RTA has also provided spaces for parking bikes as well as ticket vending machines.