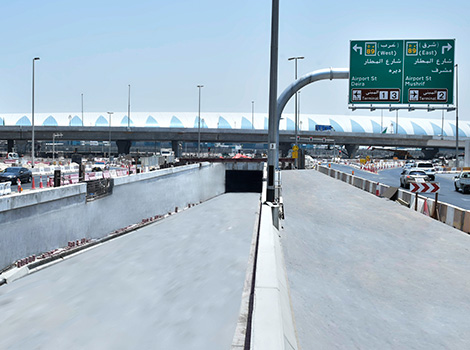 “This tunnel is a part of the Improvement of Airport-Marrakech Streets Junction Project. It included the construction of two bridges on the Airport Street of three lanes in each direction, and a ramp branching out of a downtown-bound bridge leading to Dubai International Airport Terminal 3, thus bypassing the light signal. It also included the construction of another bridge leading to the premises of the Dubai Aviation Engineering Projects (Ex Dubai Airshow). The Project will cut the waiting time at the junction from seven minutes to less than a minute,” explained Nabeel Mohammed Salih, Director of Roads at RTA’s Traffic and Roads Agency.

“The third was the Marrakech-Airport Streets’ junction comprising the construction of two bridges of three lanes in each direction along with a ramp leading to Airport Terminal 3 without waiting at the light signal. It also included the construction of another bridge leading to the premises of the Dubai Aviation Engineering Projects and a two-lane underpass to serve the traffic heading leftward from the Airport Street in the direction of Marrakech Street.