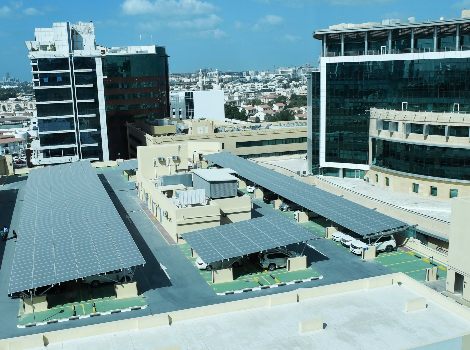 Dubai’s Roads and Transport Authority (RTA) reiterated its commitment to supporting the efforts of the UAE towards reducing carbon footprint and global warming worldwide. RTA corporate practices in this regard are aligned with the Dubai Government’s drive to reduce carbon emissions across all operational and infrastructure projects, which contributes to environmental sustainability in alignment with global practices.

In practice, RTA adheres to the quality standards of fuel used in vehicles and encourages the shift to electric, hydrogen and autonomous vehicles. It made further efforts to provide an infrastructure for recharging electric vehicles, besides encouraging the use of public transport services like buses and railways.
“RTA fully supports the long-term national initiative launched by His Highness Sheikh Mohammed bin Rashid Al Maktoum, Vice-President, Prime Minister of the UAE, Ruler of Dubai, in 2012 fostering a green economy in the UAE under the theme Green Economy for Sustainable Development. RTA is among major government entities that share the responsibility for environmental sustainability in Dubai in particular, and the UAE in general, through constant updating of its strategic plans in this field,” Nasir Bu Shehab, CEO of Strategy and Corporate Governance Sector, RTA.

“RTA has made significant achievements in reducing its carbon footprint. It has developed a specialist green economy strategy aligned with the relevant local and global policies. It has also charted a roadmap for trials of powering public buses with alternative fuels in 2015-2026. It mapped out plans for converting 50% of taxis to hybrid vehicles by 2021, and 90% of limousine fleet to electric and hybrid vehicles by 2026. It embarked on sourcing electric vehicles and abras run by alternative fuel. RTA has set a roadmap for installing energy-saving smart streetlights until 2033 and besides installing solar photovoltaic systems at RTA’s premises. RTA is supportive of the Dubai Paperless Strategy 2021 by developing smart applications for processing customer transactions and undertaking pilot projects for self-driving transport and green buildings.

“RTA made considerable energy savings and emission reduction in 2014-2020 by saving 205-gigawatt hours of electricity consumption, 187 million water gallons, and 49 million litres of fuel in addition to cutting emissions by 212 thousand tons of carbon dioxide equivalent. RTA is also actively engaged in monitoring its greenhouse gas emissions through a strategic indicator and key indicators at sectors and agencies,” added Bu Shehab.

“RTA has made remarkable achievements and developed pioneering corporate plans. It ranked the first in the Middle East and North Africa to obtain the Global Accreditation for Energy Management System in 2013 and was the first to launch a Green Economy Award in 2014. It was also the first in the region to run an integrated Green Economy Framework in 2016. RTA obtained a 5-star rating in the maturity stage in the application of inhouse green economy and environmental sustainability concept, which reached 92.2% in 2018 according to the assessment of the British Safety Council. RTA was the recipient of more than 15 global and regional awards in 2014-2020 and obtained the membership of the UN Global Compact in 2020. It developed strategies and plans to raise the profile of Dubai among other metropolitan cities in driving the green economy practices,” concluded Bu Shehab.