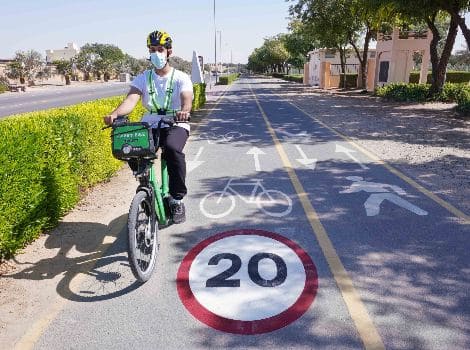 Dubai’s Roads and Transport Authority (RTA) has set speed limits for cyclists in Dubai ranging from 30km/h on dedicated lanes for amateurs to 20 km/h on lanes shared with pedestrians in urban areas. The step stems from RTA’s keenness to ensure the safety of cyclists in collaboration with the Dubai Police General HQ.

“Setting speed limits for bikers on permissible zones and tracks is part of RTA’s responsibility under the Resolution of the Executive Council No (10) for 2015 and RTA’s standards for designing cycling tracks in Dubai,” said Eng. Maitha bin Adai, CEO of Traffic and Roads Agency, RTA.

“The objective of setting a speed cap for cycles on dedicated tracks is to ensure that legislation relating to cycling are aligned with the government’s policies aimed to make cycling a lifestyle in Dubai. It also responds to the fast growth in the use of cycles as a modern sportive mobility means compatible with the environmental standard to promote sound health and sports practices,” said Bin Adai.

“RTA conducted intensive research to fix the maximum cycling speed in different parts of Dubai. The studies were based on some technical criteria, such as the land usage around cycling tracks, the number of entry/exit points, and the nature of the track in terms of width, design and the classification of nearby roads.

“Accordingly, RTA decided to set a maximum speed limit of 30 km/h on lanes dedicated to the use of amateurs, such as the cycling tracks at Nad El Sheba and Meydan as well as the joint tracks at Al Qusais, Al Karama and Al Mankhool. The speed was set as 20 km/h on lanes within urban areas. There is no speed limit for cyclists on external tracks such as Seih Assalam and Al Qudra. Cyclists are urged to comply with the safety stipulations and observe the users of these tracks. RTA will review these speed limits as part of the general review and update the integrated cyclists and pedestrians manual 2021,” said Bin Adai.

“RTA is keen to make Dubai one of the best cycle-friendly cities in the world. The realisation of this objective warrants developing and improving the infrastructure of cycling as well as the legislations that encourage people to use cycles as safe and sportive means of mobility around the city. The construction of cycling tracks and encouraging the use of cycling is part of RTA’s strategic plans such as the traffic safety strategy, infrastructure plans, flexible mobility and the integration of mobility means. We value the cooperation of Dubai Police in running joint awareness and enforcement campaigns in accordance with the federal traffic law to protect road users against traffic accidents and boost the traffic safety levels in Dubai.

Until the end of 2020, the cycling lanes in Dubai extend 425 km in total. According to RTA’s plans, the total length of cycling tracks in Dubai is expected to reach 668 km by 2025.

Brigadier Saif Muhair Al Mazroui, Director of the General Directorate of Traffic at Dubai Police stressed the importance of compliance of cyclists and users of e-scooters in Dubai with the applicable safety and use procedures set out by RTA. He noted that RTA would intensify enforcement measures on violators flouting the rules and speeds of using the dedicated cycling tracks as well as the traffic safety procedures.