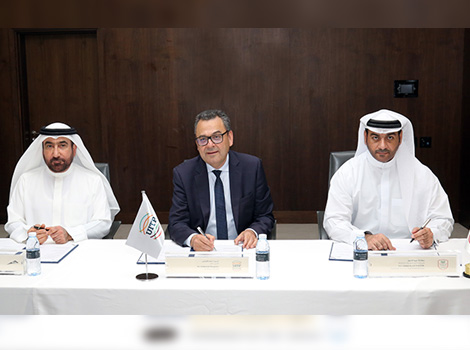 Dubai’s Roads and Transport Authority (RTA), and Transport Security Department together with the International Association of Public Transport (UITP) have established the first committee specialized in the security of transport in MENA region. The committee will cater to improving the skills of personnel in the sector by exposing them to advanced programmes to ensure the highest levels of safety and security of various public transport riders.

To this effect, an agreement has been signed between RTA, Transport Security Department and the UITP. Mohammed Obaid Al Mulla, RTA Board Member and Chairman of the Higher Committee of MENA Transport Congress and Exhibition, , signed on behalf of RTA; Obaid Al Hathboor, Director of Transport Security Department in Dubai, signed for the Department; and Mohamed Mezghani, Secretary General of UITP, signed on behalf of the Association.

Al Mulla was delighted with the establishment of the first security committee in the MENA region responsible for improving the security of transport through upgrading the skills of individuals involved. The step is driven by the utmost importance of the security element to the daily mobility of public transport riders, and the need to develop advanced initiatives in this regard.

“The agreement is aligned with the vision and ambitions of our government to ensure the safety of public transit means and facilities for the happiness of riders, be it residents, visitors or tourists. The initiative is part of RTA’s continuous efforts to rank Dubai amongst the top metropolises in various respects including this vital field,” commented Al Mulla.

Establishing this security committee for the MENA region in Dubai speaks volumes of the confidence reposed in this vibrant global city, which is increasingly becoming a hub for investors, business leaders and talents from all over the world. Such a profile is credited to the safety, security and robust infrastructure of all sectors in Dubai, including public transport; a key driver of prosperity.

“The selection of Dubai as the headquarters for the first security committee in the MENA region, was endorsed during UITP Congress held in Stockholm, Sweden last June,” added Al Mulla.

“The establishment of the committee is in line with the strategic plan of the department for boosting the security of transport in Dubai. They aim to be the first advisory platform for UITP members in the MENA region. It will offer them access to cumulative experiences and enable them to share knowledge about the best global practices such that preventive measures are taken to tackle potential security threats in the transport sector”, he added.

The Department held meetings with a variety of organisations, universities and specialist institutes of transport security to accredit the training and innovation centre as a specialist training centre in the transport sector worldwide.

Al Hathboor also revealed that the Department would build the first and biggest metro test (demo) station with full details. It spans an area of 3225 square feet and rises 8 metres in height. “Building this station, will provide practical and simulative training replicating the reality by using artificial intelligence for theoretical and practical training. Training includes detecting strange items and handling suspicious at stations. It will also enable the training of specialist teams on handling suspects in the station and developing tactical plans accordingly. This strategy for qualifying and training of human resources is at part with the highest training standards in preparation for hosting Expo 2020,” he explained.

“Dubai is an advanced global model to be emulated in various aspects including public transit means, which serves more than 500 million riders per year, according to RTA statistics. We, in the Transport Security Department, act as an integrated security system working around-the-clock out of our keenness to ensure the safety and security of public transport users. We also seek to raise the standing of Dubai as one of the safest cities in the world,” concluded Al Hathboor.

“Ensuring the safety of public transport riders is a key pillar of service delivery. The safety of riders is a top priority of the UITP and various committees. The increasing stress on security and safety in the light of the rising security threats to public transport systems warrants developing plans and programmes to cope with these challenges. It also requires trained personnel to curb the impacts of such risks and ensure the service continuity for the benefit of millions of users,” said Mohammed Al Mezghani, UITP Secretary General.

Al Mezghani was pleased to have the efforts of the UITP integrated with the Transport Security Department and RTA for sharing knowledge with a worldwide network of experts. He concluded that the signing of this agreement would pave the way for improved training on public transport security and amplify Dubai’s experience in this regard to the world over.