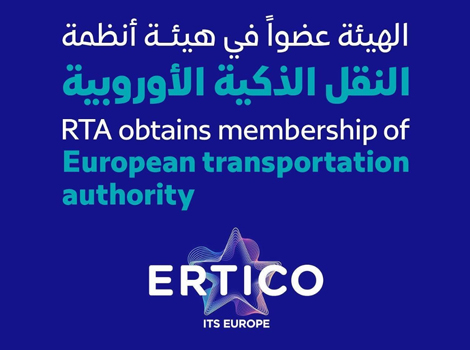 Dubai’s Roads and Transport Authority (RTA) has been endorsed as a member of the European Road Transport Telematics Implementation Coordination Organisation (ERTICO). The move is part of efforts to sustain RTA’s excellence drive and envision the future of transportation and Intelligent Transportation Systems (ITS). It serves RTA’s overall strategy of providing safe and smooth transportation for all.

Maitha Bin Adai, CEO of RTA’s Traffic and Roads Agency has recently signed membership subscription to ERTICO to step up the focus on ITS by commissioning research, using open technology and sharing expertise and knowledge.

“Under the membership, RTA will engage in a variety of initiatives, deliverables and performance indicators. Examples include participation in R&D related to ITS using artificial intelligence, and hosting RTA’s young engineers at the premises of ERTICO in Brussels for a one-month training ITS fields and projects,” said Maitha

“The membership package enables RTA to take part in preparing and updating technical specifications and international standards of ITS and review initial results of practical initiatives funded by ERTICO. RTA will also have the chance to make visits to experiment sites and have access to a restricted advisory for review and comments, and obtain supporting data about ITS future projects”.

“The membership enables RTA to showcase its profile as a key player in the field of Smart Mobility through meeting with other stakeholders and delegates of ERTICO attending conferences in Europe, America, China and Japan. RTA will also obtain an insight into various markets, receive feedback, and have access to tools, technologies and international standards of the industry. Such inputs are of particular importance and relevance as smart mobility is integrated into RTA’s current and future projects,” she confirmed.