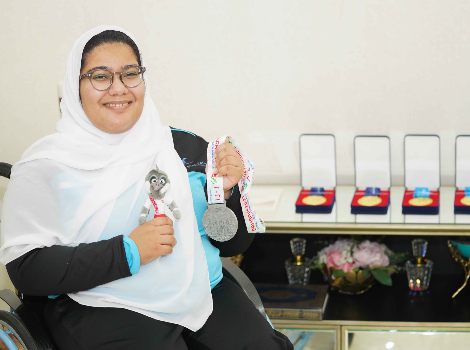 Dubai’s Roads and Transport Authority (RTA) will sponsor and empower the Olympic athlete Aisha Al Mutaiwee, who won four Gold medals in The Para Powerlifting Asia-Oceania Open Championships. The move is part of an agreement with the Dubai Club for People of Determination, to support and empower the People of Determination in sports. It stems from the keenness of both parties to promote their strategic cooperation, integrate their efforts and exchange experiences.

The agreement aims to provide moral and physical resources to empower and promote the skills of people of determination. It seeks to open the door for their participation in local and international events as well as external training camps and provide them with the technical support needed to lead them to obtain top honours.

“Through this agreement, RTA aims to raise the public awareness about the importance of empowering People of Determination such that they can have a real contribution to the community. Achieving this objective requires creating appropriate opportunities for the people of determination and encouraging their integration into society. The move also comes in line with the national policy to empower them and offer them equal opportunities.

“RTA is keen to launch effective community initiatives, such as supporting the player Aisha Al Mutaiwee in the sports field. RTA’s initiatives for various community members (youth, students, people of determination, girls and women) were launched after conducting studies that included the goals and the desired results. RTA also cares about following up on the results achieved and carrying out further improvements to reach the specific goals,” concluded Al Redha.

“RTA’s initiatives will contribute to the integration of people of determination in sports to identify their talents and cement the partnerships with various spectrums of the community, especially as  sports has become a lifestyle and a gateway to change for the better. The successes of the people of determination can be attributed to the support and positivity of our leaders, which opened the door to realise their ambitions,” added Al-Usami.

RTA’s agreement with the Dubai Club for People of Determination contributed to exchanging expertise and enhancing the partnerships in the interest of people of determination. It also empowered them to prepare and participate in local and international championships. The two parties are keen to hold regular meetings to review the best practices in this field.