(Nabhan: 20 frequent violators have been deported) 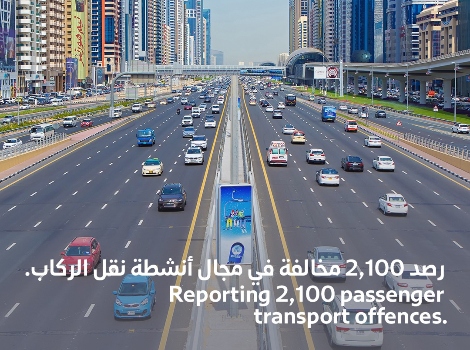 Dubai’s Roads and Transport Authority (RTA) has carried out an inspection campaign targeting unlicensed passenger transport, taxis and limousines for about 30 days. The campaign was launched in implementation of the Executive Council’s Resolution No. (33) for 2016 governing passenger transport activities in Dubai.

The move is taken in cooperation with strategic partners, namely Dubai Police (Airport Police Centre and Tourist Security Department), the General Directorate of Residency and Foreigners Affairs Dubai, and several other government departments.

“Other penalties enforced against violators included seizing the vehicle used in the unauthorised transportation and deporting the driver in case of making more than three offences. Accordingly, 60 vehicles have been impounded, and 20 violators have been deported in coordination with the General Directorate Of Residency And Foreigners Affairs Dubai,” he noted.

As for taxis, 1624 offences were reported comprising 326 offences for parking in prohibited areas, 315 offences for picking passengers from unauthorised areas, and 242 offences for obstructing traffic movement among others.

For limousines, 173 offences were made comprising 53 offences for failing to fix the driver’s permit badge, 32 offences for eating, smoking or sleeping in the vehicle during working hours, and 29 offences for parking in prohibited places to name a few.

“The Passengers Transport Activities Monitoring Department has systematic inspection plans in accordance with the laws of the UAE and regulations of RTA. The overall objective of these plans is to maintain the safety and security of Dubai’s residents and tourists and realise RTA’s vision of safe and smooth transport for all,” added Nabhan.