Opening of the last two phases of roads leading to Expo 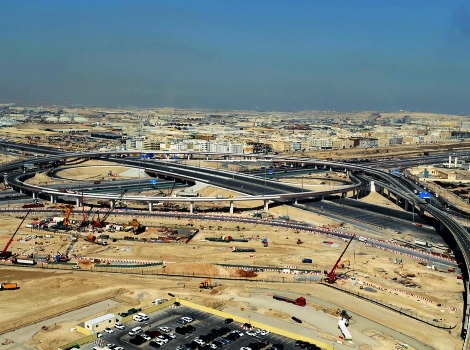 Dubai’s Roads and Transport Authority (RTA) has opened on 15th February 2020 the last two phases of roads leading to Expo 2020 site. Construction works under these two phases included a flyover linking Sheikh Mohammed bin Zayed Road and Expo Road as well as two flyovers on Sheikh Mohammed bin Zayed Road to ensure a smooth traffic flow to and from the site of Expo. Works also included bridges extending 7km and roads extending 43km in addition to 3 interchanges. By opening these last two phases, RTA has accomplished construction works of all phases of Roads Leading to the Expo site.

The project has been undertaken in response to the directives of His Highness Sheikh Mohammed bin Rashid Al Maktoum, Vice-President and Prime Minister of the UAE and Ruler of Dubai, to develop roads and transport networks in support of Dubai hosting  Expo 2020. The overall aim is to ensure a smooth mobility experience for Expo visitors and serve future projects in the area.

The improvement of roads leading to Expo is one of the biggest road projects undertaken by RTA to meet the needs of hosting Expo 2020 in Dubai. Due to the massive scope of the project, it had been divided into six phases to ensure the timely completion of all works, well ahead of the Expo opening.

“Works on the last phase of the project included transforming the previous roundabout at the intersection of Sheikh Mohammed bin Zayed Road and Expo Road into a flyover enabling free movement in all directions. Works covered widening and elevating Expo Road by constructing two bridges of six lanes in each direction along with turns and ramps to ensure smooth traffic flow from Sheikh Mohammed bin Zayed Road to Abu Dhabi and vice versa. These works will ease the traffic movement from Expo Road to Sheikh Zayed Road,” said His Excellency Mattar Mohammed Al Tayer, Director-General and Chairman of the Board of Executive Directors of RTA.

“The concluding phase of the project covered the construction of two flyovers on Sheikh Mohammed bin Zayed Road to ensure a smooth traffic flow from and to the site of Expo (to be opened gradually in coordination with the office of Expo 2020) in addition to road works extending 16 km,” said Al Tayer.
“The first is Expo Interchange; which included the construction of two 6-lane bridges to serve the traffic movement from Dubai, Sharjah and other Emirates accessing the parking lot of Expo. Works also included the construction of two 2-lane bridges for vehicles coming from Abu Dhabi heading to Expo and a 2-lane bridge to ease the exit of vehicles from Expo to Sheikh Mohammed bin Zayed Road in the direction of Abu Dhabi.

“The second is Al Maktoum Airport Interchange; which included the construction of a 3-lane bridge to serve traffic from Dubai, Sharjah and other Emirates heading to Expo and a 2-lane bridge to ease the exit of vehicles from Expo in the direction of Abu Dhabi. RTA also constructed surface roadworks to facilitate the turns from and to Abu Dhabi along with the construction of service roads on both sides of Sheikh Mohammed bin Zayed Road,” added Al Tayer.

By opening the last two phases, RTA has completed all construction works of Roads Leading to Expo Project. Last December, it opened Phase 6; which included  1.4km bridges and 8km roads. The previous roundabout at the intersection of Emirates Road and Expo Road has been transformed into a flyover providing free traffic movements in all directions.

In February 2019, RTA opened Phase 5; which encompassed the construction of bridges stretching 2.6km and roads spanning 3km. The number of lanes of Expo Road increased from three to six lanes in each direction over a three-kilometre stretch. Service roads were added to ease the traffic condition and Expo Road has been elevated at the intersection of Al Asayel Road by an 800-metre long bridge of six lanes in each direction. Two other one-km bridges were constructed to link Expo Road with the service road at the area and streamline the traffic flow from and to Expo.

RTA had set a master mobility plan for Expo to ensure safe and smooth transport of Expo visitors. Besides developing a sprawling network of roads and bridges, RTA also undertook Route 2020 project for extending Dubai Metro Red Line 15km from Nakheel Harbour and Tower Station to the site of Expo.
The plan also comprised deployment of mass transit means such as environmentally-friendly buses for commuting visitors from key assembly points in Dubai to Expo. It also catered to the deployment of taxis involving the provision of taxi ranks and streamlining their movement.

RTA also opened the Enterprise Command and Control Centre (EC3); one of the biggest worldwide as far as the use of smart technologies and control of multi-modal transit means at present or in the future. It also assists sound mobility plans and copes with various potential mobility challenges in the Emirate.