(Dubai becomes the first city outside US to host Roxo™) 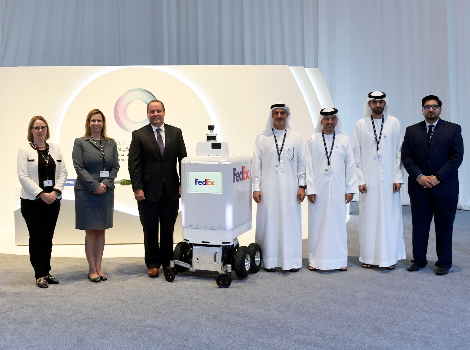 Dubai’s Roads and Transport Authority (RTA) and FedEx Express, a subsidiary of FedEx Corp (NYSE: FDX), have signed a Memorandum of Understanding (MoU) providing for the autonomous delivery device Roxo™ to have its international debut in Dubai.

“We are proud that Dubai will be the future host of the delivery device Roxo™ for the first time outside of the United States. This step complements the UAE AI Strategy, Dubai Self-Driving Transport Strategy, and RTA’s first strategic goal: Smart Dubai. This autonomous personal delivery device will play a new role in the last-mile delivery challenge as it is designed to travel on sidewalks and along roadsides, safely delivering smaller shipments to customers’ homes and businesses,” said Bahrozyan.

“Dubai has become a fertile land for cutting-edge technologies of smart mobility thanks to its advanced infrastructure. RTA applauds the announcement move by FedEx to name Dubai as a future test location for Roxo, and the first city in the world outside the USA to host this appearance,” he added.
“We are excited for Dubai to be the first international city to host an appearance by Roxo. Dubai is recognized internationally as a future-forward city, and has great ambitions for driving AI technologies in delivering mobility services, said Mr. Muhs.

“Roxo™ is an autonomous personal delivery device with features including pedestrian-safe technology from the iBot plus advanced technology such as LiDAR and multiple cameras, allowing the zero-emission, battery-powered bot to be aware of its surroundings. These features are coupled with machine-learning algorithms to detect and avoid obstacles, plot a safe path, and allow the bot to follow road and safety rules. Proprietary technology makes it highly capable, allowing it to navigate unpaved surfaces, curbs, and to even climb some steps for an extraordinary door-to-door delivery experience,” he added.