Launching of tests of the world’s first ‘Autonomous Pods’ 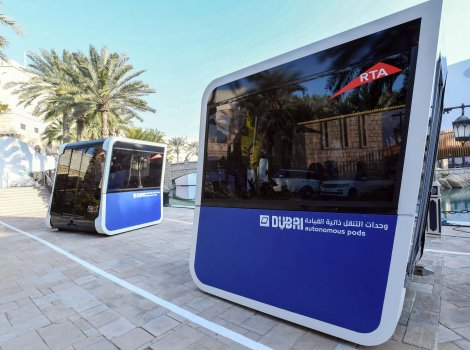 The Roads and Transport Authority (RTA), in cooperation with Next Future Transportation, launched the first tests of the world's first autonomous pods on the sidelines of the World Government Summit. The step is part of RTA’s efforts under Dubai Future Accelerators initiatives.

The autonomous pods are designed to travel short and medium distances in dedicated lanes. They can be coupled in 15 to 20 seconds or detached, depending on the destination of riders, in 5 seconds. The autonomous pods are fitted with cameras and electromechanical technologies to carry out the coupling and detaching processes, and this feature can be activated in-motion.

Each pod measures 2.87m in length, 2.24m in width and 2.82m in height. It weighs about 1500 KG and has a capacity to accommodate ten riders (6 seated, four standing). The autonomous pod is fitted with a battery that supports 3 hours of operation; which is chargeable in 6 hours. Its average speed is 20 k/h.

HE Mattar Al Tayer, Director-General and Chairman of the Board of Executive Directors of the Roads and Transport Authority (RTA), said, “The pilot test of driverless units is directed by HH Sheikh Mohammed bin Rashid Al Maktoum, Vice-President and Prime Minister of the UAE and Ruler of Dubai, in the context of transforming Dubai into the smartest city worldwide.

“The RTA has signed an agreement with the American Next Future Inc. to develop autonomous units named (NX1) as part of the initial phase of Dubai Future Accelerators. The prototypes of these units are manufactured in Italy and shipped to Dubai to put them on trials. These pods run on a virtual pre-configured and programmed lane and are overseen by the operational system.

“The success of initial tests of these units will bring about a breakthrough in transportation systems that offer innovative mobility solutions and ease snarls in the city. The RTA is keen on ensuring the principle of safety in all services delivered to clients. The autonomous pods have three protection systems in order to ensure full control and avoid crashing into any body. The main system comprises 3D cameras, and the second one is a standby system based on ordinary cameras, and the last is operated manually by the operator.