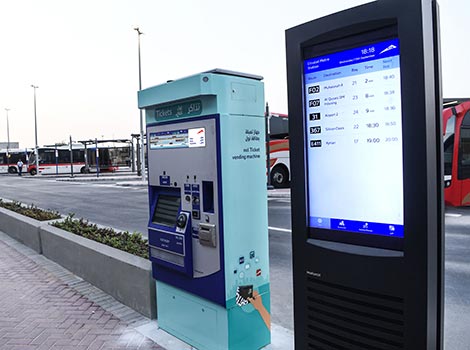 Dubai’s Roads and Transport Authority (RTA) has recently completed the installation of a new generation of nol card and ticket vending machines (TVMs) at several bus stations in the city, in addition to the smart Real-Time Information (RTPI) screens displaying updates of bus timings.

“This new generation of nol card and ticket vending machines comes with a set of novel features and installed for the first time at bus stations. They are configured to accept payment through debit and credit cards and accept NFC (contactless) payment as well as payment through Virtualised nol Cards, be it at the new machines or offices. These devices are equipped with CCTV cameras for the security and safety of users and have a change-return feature valid only when the banknotes received is higher than the chargeable amount,” said Khalid Al Awadhi, Director of Transportation Systems, Public Transport Agency, RTA.

“We have installed the new machines at some of the main bus stations as part of RTA’s plan to deploy these machines at all transport stations. Through installing these machines, RTA seeks to improve the experience of customers and boost their satisfaction and happiness. These devices have high accuracy and efficiency in performing various procedures required by public transport commuters.

“We have also completed the installation of 133 new generation of smart RTPI screens to display real-time updates of bus timings at 13 public bus stations and 5 bus stops. The screens will offer public bus riders instant updates on bus timings, which saves the waiting time of passengers and enables them to revise their journey plans in the event of any emergency changes or rescheduling of the services,” added Al Awadhi.

“This new generation of screens is powered by solar energy, which fits well with our leaders’ drive to switch to clean and alternative energy sources in powering Dubai projects. The use of environmentally-friendly solutions has become a workstyle of RTA and the project constitutes part of Dubai’s Smart City initiative and contributes to RTA’s efforts to ease the use of public transport means and the provision of high-class services. The screens display the arrival time of the upcoming bus and the following one as well, at each stop/station. RTA had also installed touch screens to serve as journey planners, display the whole public transport map, and list RTA’s smart services,” he explained.

“RTA is keen to lead the way in using cutting-edge technologies of mass transport and supporting services that add to the happiness of Dubai’s residents, visitors and tourists, especially during the lead-up to Expo 2020,” concluded Al Awadhi.