Dubai Metro accomplishes a decade of happy journeys for 1.5 b riders


(Al Tayer: Dubai Metro is credited to Sheikh Mohammed’s vision for a world-class infrastructure in Dubai) 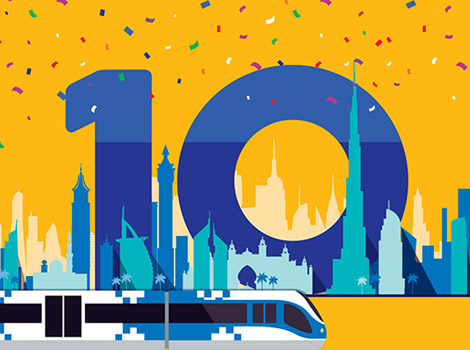 Dubai’s Roads and Transport Authority (RTA) is celebrating (Monday) September 9th, 2019, the 10th anniversary of Dubai Metro, which had been inaugurated on 09/09/2009. The first decade of the metro operation has been marked by fabulous successes reflected by full compliance with the top global safety standards, and operational efficiency depicted by on-time journeys. The success indicators are also underscored by the massive number of total riders lifted since the launch of the service whose number exceeded 1.5 billion riders by the end of 2019 August.

At 09:09:09 pm on Wednesday 09.09.2009, HH Sheikh Mohammed bin Rashid Al Maktoum, Vice-President and Prime Minister of the UAE and Ruler of Dubai, opened the Red Line of Dubai Metro spanning 52 km and comprising of 29 stations (4 underground, 24 elevated, and 1 at-grade). Exactly two years later, on 09.09.2011, HH opened the Green Line of Dubai Metro, extending 23 km and comprising of 18 stations (6 underground, and 12 elevated). The two lines intersect at the Union and Burjuman stations.

“Dubai Metro is a brainchild of HH Sheikh Mohammed bin Rashid Al Maktoum, Vice-President and Prime Minister of the UAE and Ruler of Dubai. It compliments a shrewd vision of HH for a world-class infrastructure capable of thrusting the standing of Dubai as a global hub for finance and business,” said HE Mattar Al Tayer, Director-General and Chairman of the Board of Executive Directors of RTA.

“The concept is driven by a firm belief of HH in the vitality of metro systems for the sort of urban development envisioned for the Emirate. HH projected the metro system as the backbone of a transit system that connects hotspots in the Emirate, providing safe and smooth mobility for all. To match that supreme vision, HH directed to construct metro facilities par excellence.

“The huge successes of Dubai Metro have gone far and wide beyond the realms of the Emirate. The metro has embellished the global profile of Dubai as a splendid metropolis, business hub, and a destination for a fancy living environment. The metro is a gorgeous addition to Dubai’s iconic landmarks and uses state-of-the-art technology of the rail industry. Furthermore, it has carved a niche for itself as the world’s longest driverless metro network,” commented Al Tayer.

Ridership on the go

RTA Chairman was impressed by the growing metro ridership; which reveals that RTA’s plan for increasing the share of public transport riders is going in the right direction. “The growing number of metro users reflects the evolution in the culture of using mass transport means in the community. People started to grasp the benefits of using public transport such as the peace of mind, physical relief, smooth mobility and reduced outlay on fuel and maintenance of vehicles,” he noted.

“From the start of operations on 09.09.2009 until the end of August this year, Dubai Metro lifted about 1.5 billion riders. The number of metro riders soared from about 39 m riders in 2010 to as much as 69 m riders in the following year. With the launch of the Green Line of Dubai Metro in Sept 2011, the metro riders rocketed to 109 m riders in 2012. The ridership continued to hit new heights and in 2015 it reached 179 m riders, and by the end of 2018 it broke the two-hundred-million barrier; clocking 204 million riders. Currently, Dubai Metro serves about 650 thousand commuters daily; a record that significantly surpasses the number forecasted in studies commissioned at the design phase of the project,” confirmed Al Tayer.

“The successful operation of Dubai Metro franks RTA’s strategic objective of raising the share of public transport in the total number of mobility journeys to 26% by 2030. Public transport share started to make incremental growth starting from 6% in 2006 till reaching 17.5% in 2018, recording a cumulative growth rate of about 9.3% per annum.

“The massive investments of Dubai Government in the public transport infrastructure proved a hit. It supported the flourishing development witnessed by the Emirate and provided a stimulant for business and tourism. Public transport contributed to the safe and smooth mobility, improved business climate and enhanced the competitive edge of Dubai in hosting mega-events, Expo 2020 is an example. The indirect benefits of public transport include conserving the environment, and cutting financial losses of traffic bottlenecks through deflecting the demand from private vehicles to public transit means,” he added.
Credit

Al Tayer didn’t let the occasion go without commending the efforts of RTA’s strategic partners and their contribution to the successful operation of Dubai Metro. Above all comes Dubai Police (represented by the General Directorate of Transport Security), and Serco Company, the operator of the metro network. He also thanked commuters who made the metro their ideal mobility choice and praised their compliance with the rules governing the metro operation and facilities. It is noteworthy that throughout the past ten years, no single act of vandalism of the metro facilities had been reported. Al Tayer also thanked RTA employees, especially Rail Agency staffs, for their tireless efforts in overseeing the metro service.

Performance indicators of the Dubai Metro over the past decade reveal very high operational standards. The on-time departures of the metro service clocked 99.7%. From the start of operation till the end of August 2019, the metro completed 2.348 million journeys and covered about 81.133 million km.

Through the metro service, RTA aims to improve the mobility within Dubai, especially in tourist areas and business districts. It also seeks to enhance the integration of mass transit modes in the Emirate, provide a safe and smooth transit alternative, reduce carbon emissions and improve the living experience of people.

“From the start of the metro operation in September 2009 to the end of August 2019, about 6.298 billion transactions have been made using nol cards. Transactions covered entry/exit from metro stations, buses, taxis and marine transport as well as payment of parking fees, and card top-ups. The daily use of nol cards is on the rise and has grown to 2.511 million transactions. The total number of nol cards, tickets amounted to 75.588 million cards, tickets.

“RTA’s automated fare collection system, comprising of nol cards and e-purse, is a key smart payment platform in Dubai. It supports the Government efforts to transform Dubai into the smartest and happiest city in the world. nol card boasts of high safety features, thanks to the sophisticated technologies in use. It has scooped several awards including the best-prepaid card in the Middle East.

“The e-purse is a prepaid online account for prepayment of RTA’s services. Companies can make deposits to the e-purse account instead of using cash or credit cards. About 1700 accounts have been opened and transactions processed through the purse worth about 1.136 billion dirhams.

“The e-purse has multiple features and saves the hassles of carrying cash. It enables making a secure online payment, checking account details, and cancelling payments. Clients currently can use the e-purse in paying licensing services of drivers and vehicles. Efforts are being made to broaden the use to cover various retail and corporate services,” explained Al Tayer.

On 29 June 2016, HH Sheikh Mohammed bin Rashid Al Maktoum endorsed awarding the contract of Route 2020 Project, for extending the Dubai Metro Red Line from Nakheel Harbour and Tower Station to the site of Expo 2020, to Expolink Consortium comprising French, Spanish and Turkish companies at a cost tag of 10.6 billion dirhams.

On 5 September of the same year, HH Sheikh Hamdan bin Mohammed bin Rashid Al Maktoum, Dubai Crown Prince and Chairman of the Executive Council, laid the cornerstone of Route 2020 Project signalling the start of construction works in the project.

Route 2020 extends 15 km (11.8 km viaduct, and 3.2 km underground). It has seven stations including a transfer station with the Red Line, a station at Expo site, three elevated stations, and two underground stations. It serves densely populated areas providing homes to more than 270 thousand persons, such as The Gardens, Discovery Gardens, Al Furjan, Jumeirah Golf Estates and the Dubai Investment Park.

•    Dubai Metro extends 75 km: 52 km on the Green Line and 23 km on the Green Line.
•    The metro route is partly underground (downtown areas), and the rest is an elevated track. A limited sector of the Red Line (about 3.3 km) runs above-ground.
•    Each metro train comprises of five fully air-conditioned cabins with a total capacity of 650 riders. All trains are driverless.
•    There are 79 trains available for the metro service in total. Trains in service are 51 trains on the Red Line and 16 trains on the Green Line.
•    The design capacity of the metro network is 26,000 riders per hour per direction in both the Red and Green Lines. By 2020, the Dubai Metro is anticipated to serve about 700,000 riders per day, 255 million riders per annum.
•    Three multi-level Park-N-Ride terminals have been constructed with a capacity of 8000 parking slots.
•    The interior design of the metro stations on both the Red and Green Lines as well as Route 2020 features six symbolic design themes: