(Work commences on the construction of Dynamic Messaging Signs) 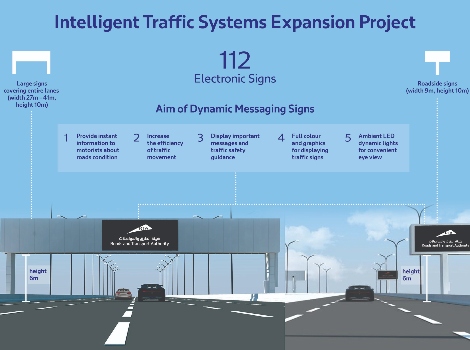 HE Mattar Al Tayer, Director-General and Chairman of the Board of Executive Directors of Roads and Transport Authority (RTA) announced that the completion rate of the Intelligent Traffic Systems Expansion Project had reached 65%.

In line with the directives of HH Sheikh Mohammed bin Rashid Al Maktoum, Vice-President and Prime Minister of UAE and Ruler of Dubai, this project will broaden the scope of intelligent traffic systems in support of making Dubai the smartest city in the world. It also reflects RTA’s efforts to harness smart technologies to ease people mobility in Dubai.

The project will expand the coverage of Dubai’s roads by Intelligent Traffic Systems from the present 11% to 60%, cut the time of detecting accidents and congestion build-ups on roads, hence ensuring a quick response.

“RTA had started the installation of new Dynamic Messaging Signs (DMS) on main roads to relay instant traffic information about road condition to motorists. The project entails the construction of 112 Dynamic Messaging Signs fitted with the latest technologies at selected locations on Dubai’s roads network as well as around mega-event spots, such as Expo 2020,” said Al Tayer.

“The signs will furnish motorists with instant information about road conditions such as congestions, accidents, and traffic safety messages. There are two types of signs depending on road classification, number of lanes and traffic volumes. The first type of signs are those installed on roadsides, while the second are large signs that cover entire road lanes. RTA has finished installing 18 panels and work is underway to complete the remaining panels according to the project schedule.” he added.

The third bundle covers the infrastructure of civil works for the extension of the fiber optic network for communication between the on-site devices and central systems about 450 km.

The fourth bundle involves upgrading the software for the advanced traffic central system, which contributes to support decision-making, and provides automatic response plans, where the system interfaces with site devices; analyses data and activates appropriate plans. Information relating to the network condition will be displayed on the DMS across Dubai.

The fifth bundle entails constructing a new Traffic Control Centre featuring state-of-the-art control rooms fitted with devices such as giant screens as well as user-friendly control systems for operators & engineers. The design caters to anticipated future expansions of the systems.

The Intelligent Traffic Systems Expansion Project is one of RTA’s Innovation Lab (RTA Masar 2030) deliverables, endorsed by HH Sheikh Mohammed bin Rashid Al Maktoum. It entails upgrading and expanding the Intelligent Traffic Systems in Dubai and constructing a new traffic management centre at Al Barsha. Upon completion, the project will ease the management of traffic bottlenecks and accidents, enhance the safety of road users, and ease personal mobility, thanks to the use of sophisticated technologies.