Completing a project with 13 bridges leading to Dubai Hills Mall 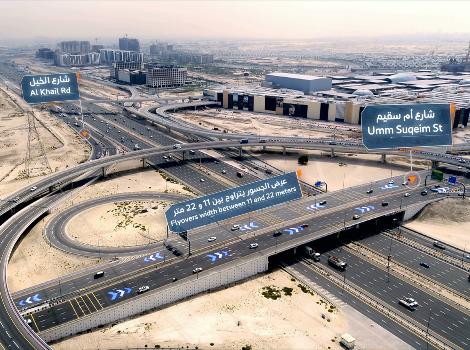 Dubai’s Roads and Transport Authority (RTA) announced the completion of all construction works in Roads and Bridges leading to Dubai Hills Mall project. The project comprises of 13 bridges extending 3700 metres in length and 11-22 metres in width, with a combined capacity of 23,500 vehicles per hour.

“The completion of roads and bridges leading to Dubai Hills Mall  along with the associated infrastructure works and improvements of Umm Suqeim Street will provide direct entry and exit points for the area from and to Al Khail Road and Umm Suqeim Street. This will ensure a seamless traffic flow to and from the Dubai Hills Mall,” said His Excellency Mattar Mohammed Al Tayer, Director-General and Chairman of the Board of Executive Directors of RTA.

“The project comprised the construction of 13 bridges with a total length of 3700 metres and width of 11 to 22 metres with a capacity to handle 23,500 vehicles per hour. Bridges included the construction of ramps extending 2500 metres. Ten of these bridges have entry and exit points to and from Dubai Hills Mall from Al Khail Road (already completed and will be opened in conjunction with the opening of the Mall). Works included the construction of three bridges providing entry and exit points for Umm Suqeim Street to separate the traffic from Umm Suqeim Street and Al Khail Road heading to Dubai Hills Mall. The new bridges have lanes leading directly to the Mall, with an intake of 7500 vehicles per hour,” added Al Tayer.

Constructed at the intersection of Umm Suqeim Street and the entry of Dubai Hills and Al Barsha, the Umm Suqeim Bridge ensures a smooth traffic flow along the Street. The bridge, which extends 500 metres and comprises four lanes in each direction, can handle up to 8000 vehicles per hour per direction. The project serves about 115 thousand residents of nearby communities such as Al Barsha South, Arjan, Dubai Hills and others.

The project also includes the improvement of internal roads at the Dubai Hills Estate to ease the movement of residents of Al Barsha South 1 and 2 by  linking with the new roads and bridges and  Dubai Hills Estate. Project works included traffic signals, shifting power and utility lines, and landscaping.

Dubai Hills Mall is one of the biggest destinations developed by Emaar as a joint venture with Meraas. An integral feature of Dubai Hills Estate, Dubai Hills Mall complements the development of coveted residential and commercial community while attracting visitors from far and wide.

Featuring two million square feet of leasable space spread out over two floors, it is home to over 650 retail and F&B outlets including family entertainment offerings, a Cineplex and hypermarket.