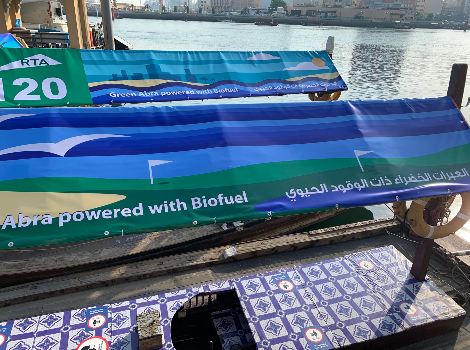 Dubai’s Roads and Transport Authority (RTA) announced that the experiment of powering five traditional abras by biodiesel 5, which is officially approved in the UAE, proved successful. The initiative, which was announced earlier with ENOC, yielded highly positive results.

Mohammed Abu Bakr Al Hashmi, Director of Marine Transport, Public Transport Agency, RTA, expressed his delight with the success of this important experiment. “We are undertaking this initiative out of RTA’s commitment to protecting the environment and public health. The use of biodiesel reduces the carbon footprint as well as the emission of harmful gasses.”

“We have applied the procedures required to measure the results of using biodiesel to operate traditional abras in comparison with the regular diesel. Results concluded were positive and no negative effects were detected on motors as a result of using biodiesel. The results were verified by an independent specialist company appointed by ENOC,” confirmed Al Hashmi.

“Based on these positive conclusions, we support the initiative of using Biodiesel 5 in powering traditional abras for several considerations. This type of fuel is effective in the recycling of waste and protecting the environment, which contributes to realising Dubai’s Clean Energy Strategy. The experiment of using Biodiesel 5 showed a reduction in the scale of emissions, compared with the use of regular diesel. And as the biodiesel is relatively cheaper, its use will be more attractive to abra owners,” he noted.

“The use of biodiesel in traditional abras operated by the private sector on Dubai Creek is optional. Operators can coordinate with ENOC Group to know more about the refuelling process and obtain promotional rates, without any costs on the part of RTA in this regard. Research indicates that the use of biodiesel will reduce the number of unburned hydrocarbons, emissions of carbon monoxide, fine particles, and sulphate gas as well as reduction of the PAH gas,” added Al Hashmi.

“We are pleased with the success of the experiment conducted jointly with the RTA. We hope the positive results concluded will encourage abra operators to use biodiesel 5 instead of regular diesel as it contributes to reducing the carbon footprint. ENOC is streaming ahead with the support of communities in which it operates and endeavours to leave a positive impression. We are looking forward to working with our partners to come up with initiatives that contribute to realising the UAE Energy Strategy 2050,” said Chief Executive Officer of ENOC Group, Saif Humaid Al Falasi.

There are 148 abras operated by the private sector on two lines on Dubai Creek. They ferry about 13 million riders annually (90% of the total number of marine transport riders in Dubai). The existing fleet of traditional abras uses 30hp diesel engines that consume 1.1 million litres of diesel per annum.

Biodiesel 5 is one of the advanced green alternative fuel products developed by the ENOC Group for the UAE market to reduce the carbon footprint and greenhouse gas emissions. Such efforts are in line with the UAE Energy Strategy 2050, which aims to provide a diverse mix of energy that combines renewable, nuclear and clean energy sources.