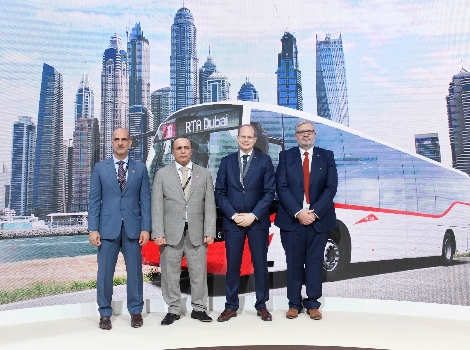 Dubai’s Roads and Transport Authority (RTA) has signed a contract for purchasing 373 buses of Volvo SB3 along with a 10-year maintenance contract in support of Dubai’s mobility plan and to cope with the rising number of public bus riders.

The new buses are compliant with Euro 6 standards, and it will be the first time buses of such standard will be operated in the MENA region. The signing of the contract, which amounts to AED474 million took place on the sidelines of UITP Summit in the Swedish capital Stockholm.

HE Mattar Al Tayer, Director-General and Chairman of the Board of Executive Directors, RTA, and Håkan Agnevall, President, Volvo Bus Corporation , signed  the contract in the presence of representatives from both the entities

“The contract covers the procurement of 373 top-class high-safety Volvo buses fitted with Euro 6 environmental-friendly engines and capable of supporting future technologies and innovations. These buses fall under UN Class II Vehicle classification, which allows flexibility in operating buses on inter-city routes or long hauls. Buses are compliant with ITxPT system that enables interoperability between IT systems in public transport, thanks to the availability of bus information database saved in the UAE (UAE Cloud),” said Al Tayer.

Each bus can accommodate 74 riders and is fitted with interactive touch screens to display instant information about the journey. Buses are also equipped with Raqeeb (Driver Behaviour Monitoring) System to track drivers’ exhaustion by using innovative technology to enhance bus safety standards. They also have Rasid (Automated Passenger Counting) System to record the actual number of passengers and match it with the Automated Fare Collection System to abort fare evasion attempts.

“99 of these buses have a unique interior setting them apart from other buses. They have more room for standing passengers, thus increases the total number of riders served, which is a practical solution for short-distance commuting. They are also fitted with interactive touch screens,” added Al Tayer.

“We are very proud and grateful for the confidence the RTA once again places in Volvo. This tender was evaluated based on total cost of ownership comparison, including fuel and operational costs, and Volvo came out as the most competitive alternative. The order is a recognition of the value we deliver to the RTA”, said Håkan Agnevall, President of Volvo Bus Corporation.

“The Euro 6 Volvo B8RLE is a well-proven platform globally and continues to set the industry standard for fuel efficiency, drivability and lifecycle costs,” he added.

“During the procurement process, RTA was keen to ensure that these buses are compatible with European Carbon Emission Standards, which are in line with RTA’s efforts to protect the environment and enhance power efficiency. These features contribute to reducing carbon footprint as well as safety and environmental sustainability; which are part of RTA’s strategic goals,” said Ahmed Hashim Bahrozyan, CEO of RTA’s Public Transport Agency.

“These buses have low-entry floor to ease the movement of people of determination. Other features include premium interiors with luxury ergonomic seats and comfort accessories like USB charging, children-dedicated seats, and WiFi service; all of which contribute to offering better transit experience to public transport users,” he concluded.