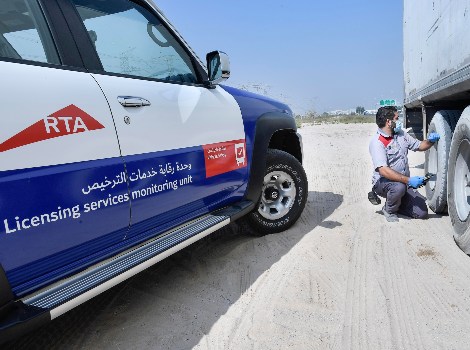 Dubai’s Roads and Transport Authority (RTA) has carried out 37,691 inspections of heavy vehicles resulting in 14,314 offences. Violations reported were related to the lack of compliance with the technical specifications and regulations governing the operation of heavy vehicles.

“The inspection of heavy vehicles takes priority in our strategic plans and forms part of our daily monitoring campaigns. Inspections are also made through RTA’s advanced devices for field monitoring of heavy vehicles, and the smart monitoring centre at the Licensing Agency. The importance of such inspections is highlighted by the vital role of heavy trucks in supporting the local economy of Dubai, especially in view of the heavy reliance of logistical transport companies on such vehicles for the transportation of commodities.

“Road accidents of heavy vehicles can be fatal and may result in human and material losses much more than accidents of other types of vehicles.

Therefore, it is imperative to ensure the safety of road users, be it pedestrians, drivers or other motorists. We stress the elements of safety, durability and technical aspects in deciding whether these vehicles and their drivers qualify for practising activities safely under sustained monitoring. The implementation of these aspects resulted in a significant drop in heavy truck accidents over the past four years (2017-2020). Such efforts contribute to realising RTA’s vision to become The World Leader in Seamless & Sustainable Mobility,” concluded Nabhan.