(The event included offering seats for new-borns across Dubai hospitals) 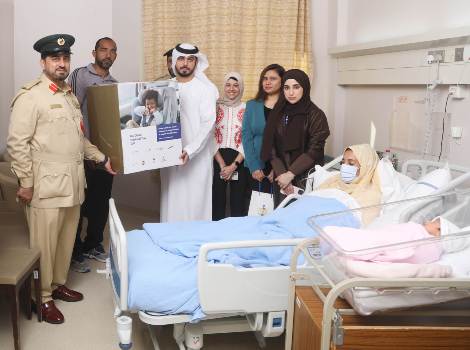 As part of the UAE National Day celebrations, Dubai’s Roads and Transport Authority (RTA) has carried out an awareness campaign in cooperation with Dubai Police, Dubai Health Authority (DHA) and UNICEF, with the support of Al Futtaim Group, the Emirates General Petroleum Corporation (Emarat) and NIVEA. During the campaign, infant seats were distributed for new-borns in Dubai hospitals.

“RTA’s participation in the UAE National Day celebrations illustrates its commitment to society and to ensure the highest standards of quality and safety in all projects and services rendered to the public. This initiative had been coordinated with partners from government and private entities to celebrate the National Day in style,” said, Bader Alsiri, Executive Director of Traffic, Traffic and Roads Agency, RTA.

The “My Child’s National Day Gift” initiative granted every new-born in the Emirate during the UAE National Day celebrations (1-5 December 2022) free baby car seats. It covered 23 hospitals where 500 seats were distributed to take a leading role in the society’s happiness, serve traffic safety targets, and encourage parents to use the vehicle’s baby seats”, explained Alsiri.

Alsiri pointed out that RTA had specific awareness plans for all target groups in Dubai. The awareness teams have a role to play towards society members, starting from new-borns to children and students, and even adult drivers and road users.

Brigadier Saif Muhair Al Mazrouei, Director of the General Department of Traffic at Dubai Police, said: “Children’s safety from all risks is of the utmost priority. He stressed the need to adhere to the executive regulations of the Traffic Law, which obliges motorists to fit the back seats of their vehicles with child seats befitting their weight and height according to the specifications applicable in the country.

“Dubai Police, in coordination with partners in RTA, educates the community on how to use the seats to ensure the safety of everyone onboard. Leaving the children in the front seat or cuddling them by one of their parents while driving is a wrong practice that poses a threat to the life and safety of children.
“The executive regulations of the Traffic Law oblige motorists to provide protection seats for children under the age of four, as well as not allowing a child who is 10 or below, or less than 145 cm tall, to sit in the front seat of the vehicle. It’s an offence that carries a fine of AED400,” he explained.

Colonel Salah Abdullah Al Hammadi, Director of the Traffic Campaigns and Awareness Department at the General Traffic Department of Dubai Police praised the efforts of RTA’s strategic partners in spreading and promoting the traffic awareness of all community members.

“This initiative is part of efforts aimed at raising public awareness of the traffic laws and regulations that call for their safety. He cautioned families against seating children under ten in the front seats and stressed the importance of installing baby seats in all vehicles” he added.

Saji Thomas, Chief of Child Protection, UNICEF, Gulf Area Office, welcomed the “My Child’s National Day Gift” initiative, stressing the importance of continuous efforts to raise community awareness about traffic safety and encourage parents to have child seats in their vehicles. Thomas also thanked RTA for its continuous focus on the protection and safety of children and reiterated their commitment to working with the Government of Dubai and all partners in spreading the culture of children's rights and the role of society in protecting and growing children in a safe environment.

Dr. Marwan Al Mulla, CEO of the Health Regulation Sector at the Dubai Health Authority stated that the distribution of baby seats to all new-borns in Dubai hospitals, during the UAE National Day celebrations, would promote the safety and security of children onboard. "Protecting children onboard requires promoting the community awareness of the importance of child-designated vehicle seats," he said.

Dr. Al Mulla expressed Dubai Health Authority's appreciation for the initiative and sponsors, and its pride in participating in such community initiatives, especially those that concern people's health and the safety of all community members.