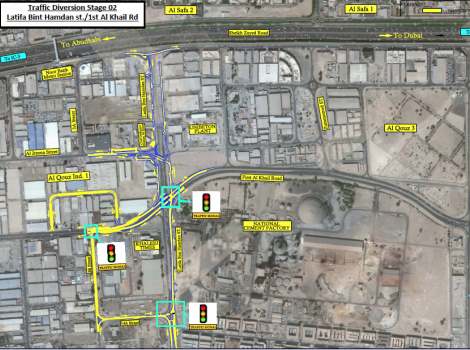 The Project will provide a vital direct link between Jumeirah and Al Khail Road in both directions passing across parallel roads (Al Asayel Road and First Al Khail Road). It involves the construction of two-tier roads and bridges providing free traffic on Umm Al Sheef Street from Jumeirah Street and Al Wasl Street to the west of the Sheikh Zayed Road. It will also provide a two-way bridge linking Latifa bin Hamdan Street and Al Zomorrod Street, to the East of Sheikh Zayed Road, with the Sheikh Zayed Road to ensure a free traffic flow.

Engineer Maitha bin Adai, CEO of Traffic and Roads Agency, said, “The traffic diversion will be opened on Friday, December 15th 2017 and continue until July 2018, and alternative streets will be provided. The diversion will enable the completion of bridges and providing free traffic flow on Latifa Bint Hamdan Street and First Al Khail Road.

“Due consideration has been given to ensuring smooth traffic movement on the intersection, and establishing accessible entry and exit points dedicated to emergency and civil defence vehicles on Latifa Bint Hamdan Street and industrial Area workshops during the project construction period. The RTA will also make improvements to the intersection of Umm Al Sheef Street with Al Wasl Street. The project includes constructing main surface roads, improving service roads to facilitate the traffic flow on the Sheikh Zayed Road, reducing the traffic density on Al Wasl Street, and saving significant time and efforts of residents road users,” added Maitha.

The RTA calls on road users to be alert, observe directional signage of alternative roads and comply with the specified speed limits for a safe and smooth transport for all.