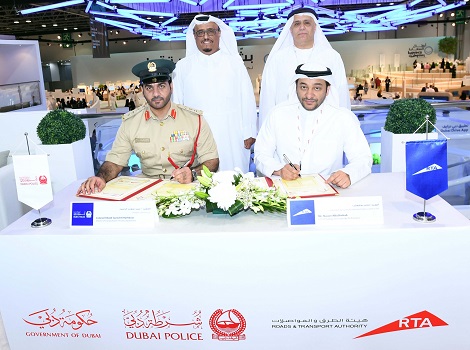 HE Lt General Dahi Khalfan Tamim, Deputy Chairman of Police and Public Security in Dubai, and HE Mattar Al Tayer, Director-General and Chairman of the Board of Executive Directors of Roads and Transport Authority (RTA), have witnessed the signing of a Memorandum of Understanding (MoU). The MoU calls on protecting the safety of transport sector along with users and facilities in the Emirate of Dubai.

The signing of the MoU underscores the keenness of the two parties to coordinate their efforts in protecting and securing the safety of users and facilities of transport systems in the Emirate of Dubai. They expressed keenness to discharge their roles according to their respective tasks and responsibilities defined in the applicable legislation and regulations.

The MoU is part of endeavours to support and coordinate efforts aimed to secure the protection and safety of the transport sector along with users and facilities. It also provides for sharing information about the risks to which the transportation users and facilities are liable and calls for exchanging common concerns in a bid to streamline procedures and improve the overall performance.

It calls for enhanced coordination in carrying out emergency drills, stepping up communication channels for the joint public interest, and accelerating the flow of information between Dubai Police Operations Room and the corporate monitoring & security operations of the RTA.

According to the MoU, the Transportation Security Department shall provide maximum security and safety to users and facilities of the transportation sector, and adopt the best practices and latest technologies for the security of transport. It calls for identifying and analysing transportation risks, providing security support during the occurrence of such hazards, protecting the safety of transport, and charting out plans for addressing the requirements of coping with accidents, disasters and potential threats.

According to the MoU, RTA shall provide the Dubai Police with all requisites that may assist the Dubai Police in carrying out its tasks, and plans relating to transportation systems and facilities along with affiliated institutions to be established in future to chart out proper security and protection plans.

HE Mattar Al Tayer, Director-General and Chairman of the Board of Executive Directors of RTA thanked the General HQ of Dubai Police headed by HE Lt General Dahi Khalfan Tamim, Deputy Chairman of Police and Public Security in Dubai, and HE Major General Abdullah Khalifa Al Marri, Commander-in-Chief of Dubai Police. Al Tayer thanked them for the huge support and cooperation in ensuring the security and safety of mass transit means. He noted that such coordination would reflect positively on citizens and residents of Dubai Emirate. He commended the continued improvement in the strategic partnership between the two parties.