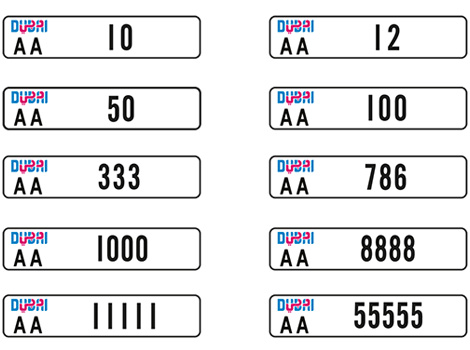 Sultan Al Marzooki, Director of Vehicles licensing, RTA Licensing Agency, said, “This auction differs from previous auctions in the exclusivity of numbers offered. The bidder who obtains one or more of these numbers will enjoy the privilege of having these numbers removed from offering in RTA auctions till the end of next year (2018).

“Registration opens on Sunday 3 December through the website or customers service centres at Umm Al-Ramool, Deira, Al-Barsha, and Al-Tawar Municipal Center. Registration for the auction can be made on the same day of the sale, from 02:00 pm up to 05:00 pm on December 9th.

“Participation in the auction requires the potential bidder to have a traffic file in Dubai. A cheque amounting to AED25,000 has to be deposited but can be redeemed in case no successful bid is made. An amount of 120 dirhams has to be paid as subscription fees. Potential bidders can also pay deposits and subscription fees by credit cards through the website. Successful bidders have to settle the due amounts within ten working days starting from the closure of the auction to avoid deposit forfeiture and blacklisting of defaulters. Any bidder can own any number of plates.

“A dedicated team at RTA’s Call Center (8009090) has been furnished with all information about the auction to respond to any public inquiries relating to the sale. Open auctions are quite popular as they offer direct competitive bidding in an action-packed and transparent atmosphere. Thus they contribute to realising RTA’s third strategic goal (People Happiness), especially for those who have a passion to own distinctive plates,” concluded Al Marzooki.