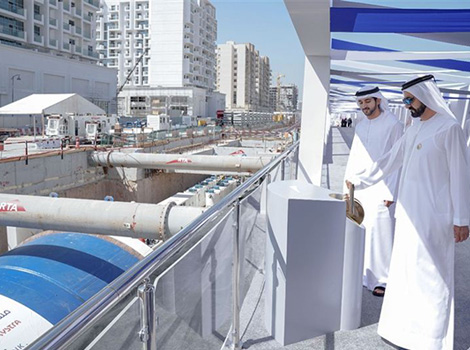 HH Sheikh Mohammed bin Rashid Al Maktoum, Vice-President and Prime Minister of the UAE and Ruler of Dubai, has launched the tunnel drilling works of the Route 2020 Project, which extends the Dubai Metro Red Line 15 km from Nakheel Harbour and Tower Station to the site of Expo 2020. His Highness also reviewed the interior design of the new Rolling Stocks of the Dubai Metro and the progress of the project.

Upon arrival at Discovery Gardens, His Highness was welcomed by HE Mattar Al Tayer, Director-General and Chairman of the Board of Executive Directors of the RTA, top executives of the RTA, Project Engineer (Parsons Systra) and the Project Contractor (Expolink Consortium).

At the start of the visit, His Highness attended a briefing by Al Tayer on the progress of work on Route 2020, starting from the endorsement of the Project by HH Sheikh Mohammed bin Rashid Al Maktoum, and covering the awarding of the Project Contract to Expolink Consortium in June 2016, and the ground breaking ceremony in September 2016 by HH Sheikh Hamdan bin Mohammed bin Rashid Al Maktoum, Crown Prince of Dubai and Chairman of the Dubai Executive Council. First piling works at the Expo site started on 1 November, 2016. Work on casting the first pre-cast concrete slabs started in April this year while construction works for the metro viaduct started in August this year.

Interior Design
His Highness then inspected the new interior design of the Dubai Metro carriages, which are being manufactured in France under a contract for the supply of 50 trains; 15 for serving Expo 2020 and 35 for upgrading the service of the Dubai Metro.

His Highness inspected the new additions and improvements to the interior design of the metro cars such as dedicating the last car for women and children and leaving part of the first car for the Gold Class and other cars for Silver Class. Seats will be transversal in the Gold Class, and longitudinal in the Silver Class as well as the Women & Children car. The exterior design of trains will remain as it is, in order to maintain the design identity of the Dubai Metro and its familiar colours.

Some design changes that do not affect the main design identity will be made. Part of these are new designs for the handles, lighting, and locations of digital signage (VBSD). They also include an illuminated dynamic map for the metro route and stations, using an LED power-saving lighting system, and modifications to the design of the luggage compartment to that enables is to be used by standing commuters. Improvements also cover the shape and number of handles, the use of modern digital display systems, distribution of seats on the two sides of the train and enhancements to the gangway connecting carriages. The new carriages are customised for the use of people of determination and the smooth boarding and alighting of metro users.

Al Wugeisha Expo 2020
His Highness launched the operation of the Tunnel Boring Machine named by the RTA as Al Wugeisha Expo 2020, marking the start of drilling works in the tunnel. The tunnel starts at the Discovery Gardens and stretchs 3.2 km up to The Green Community. It features depths ranging from 12.5 to 36 metres.

Al Wugeisha can crush stones and penetrate through sandy layers or any soil components that might be encountered in the drilling process. It has a huge metal gear supported by an automated tail, and carries in its front a cutting wheel with a cavity, the shape of which varies according to the type of drilling, soil layers and type. At the back of the cavity, there are hydraulic levers that support the propulsion of the drilling. It is also fitted with a machine for removing the soil, tubes for discharging the mud, and a control room in addition to other hi-tech components with high features to accelerate the drilling process. The total length of Al Wugeisha is 103 metres.

Al Wugeisha is also an environmental-friendly machine that has no negative impact on land layers surrounding the drilling area. Moreover, the tunnels produced by the machine will have symmetrical dimensions, which makes it easy to complete other construction works and reduce tunnel wall installation expenses.

This October, the contractor completed the preparations for locating Al Wugeisha at Al Furjan at a depth of 12.5-metres. This involved creating a rectangular shaped concrete wall supported by horizontal steel supporters. The project is unique in terms of the method of preparation required for the drilling machine before the start of works and the latest drilling techniques it uses.