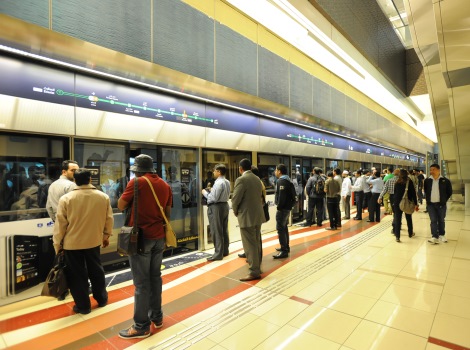 RTA’s Rail Agency has  announced the better metro/tram service changes effective November 1st, which coincides with the Public Transport Day. The step is intended to upgrade services, cater to the needs of riders and bring them happiness so that they reach their destinations faster, besides attracting more customers to mass transit modes.

"We would like to inform the public in general and metro users in particular that the Express Metro service had been improved by deploying trains in six stations, namely: Rashidiya, Rigga, Emirates Towers, First Gulf Bank, Jumeirah Lakes Towers and the UAE Money Exchange. The updated service would start from 05:00 am in the above-mentioned stations in conjunction with the Red Line metro services. The selected stations are the most used metro stations by passengers to get to their workplaces early. This would ease congestion at the first metro service at all stations,” added Al Mudharreb.

"According to the revised schedule, Dubai Metro Red Line would be operational from Saturday to Wednesday from 05:00 am to 12:00 midnight, whereas the Green Line services would be available from 05:30 am to 12 midnight. The Tram service would start from 06:00 am to 01:00 am on the following day,” continued Al Mudharreb.

The Director of Rail Operations at the RTA Rail Agency reiterated the RTA’s keenness to ensure customer delight and customer satisfaction from various community segments by providing sophisticated, safe and fast transit modes that enable them to travel through the emirate of Dubai to run their daily errands and enjoy traveling in the metro, tram and other mass transit modes.