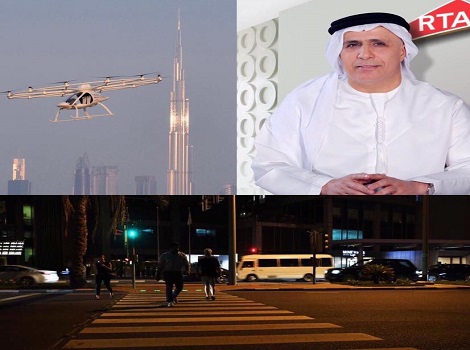 HE Mattar Al Tayer, Director-General and Chairman of the Board of Executive Directors of Roads and Transport Authority (RTA), announced that RTA would be launching a new package of smart services to clients in Gitex 2017. The services on show will include Dubai Integrated Mobility Transport Platform (branded as S’hail), Smart Pedestrian Crossing Signal, two-seater Autonomous Air Taxi, Dubai Drive App, and Customers Loyalty Points Programme (nol Plus).

“The launch of this new package of apps and smart services heralds the implementation of the initiative of HH Sheikh Mohammed bin Rashid Al Maktoum, Vice-President and Prime Minister of the UAE, and Ruler of Dubai, to transform Dubai into the smartest city in the world. Realizing this objective requires rendering RTA services accessible to clients via mobile phones 24/7 all year round, to enhance customers’ experience and happiness. The offering of these services is a manifestation of the keenness of HH Sheikh Hamdan bin Mohammed bin Rashid Al Maktoum, Dubai Crown Prince and Chairman of the Executive Council. It also signals the close follow-up of HH Sheikh Maktoum bin Mohammed bin Rashid Al Maktoum, Deputy Ruler of Dubai and Deputy Chairman of the Executive Council, to deliver high-class customer services using ultra-modern technologies,” said Al Tayer.

“Gitex will witness the inauguration of the Integrated Mobility Platform in Dubai (S’hail). It offers customers access to the entire transit means in Dubai through a single window (smart app), rendering Dubai one of the first cities in the world to develop such an integrated platform. It involves integrating RTA’s transit services (metro, tram, buses, waterbus and taxis) with the transit services of other parties in Dubai such as the e-Hail, Uber and Careem. In a later stage, the Platform will integrate with other marine transit services such as limousines, Palm Monorail and Dubai Trolley via a single app enabling clients to book the service and pay the applicable fare,” noted Al Tayer.

“The Integrated Mobility Platform encompasses monitoring and full integration of multi-modal transport services of both RTA and other parties in Dubai. It will also take on board the e-Hail and limo services, thus offering clients added mobility options enabling them smooth journey planning, booking and payment experience,” he added.

Al Tayer also announced that RTA’s exhibits in Gitex would include the 2-seater Autonomous Air Taxi (AAT) manufactured by Volocopter. “The maiden trial flight of the AAT was made in the presence of HH Sheikh Hamdan bin Mohammed bin Rashid Al Maktoum, Dubai Crown Prince and Chairman of the Executive Council. The electrically powered AAT has high safety features, thanks to its design comprising 18 rotors ensuring safe cruising and landing in case of rotor failure. The air taxi is characterised by autonomous flying, thus enabling the movement of people from one place to another without human intervention or requiring a flight license,” said Al Tayer.

“In Gitex, RTA would focus on the integration of the AAT with mass transport systems such as the metro, tram, buses, marine transit modes and taxis as well as the procedures of offering the AAT service to the public via the Integrated Mobility app. A message would be sent to the customer showing the flight details and the booking reference. The customer can track the movement of the AAT en route. Upon the arrival of AAT to the location, the customer has to enter the Booking Ref in the interactive screen of the AAT. The AAT would then start flying to the intended destination, which is fitted with an exclusive landing pad,” he elaborated.

Al Tayer described the smart crossing system (smart pedestrian signal), which would be exhibited in RTA’s Stand in Gitex, as one of RTA’s pioneering innovations across the region. “The smart pedestrian signal has a smart operation system triggered by sensors connected to a ground optical system synchronised with the operation of the signal lights. It reads pedestrians’ traffic on the pavement (before crossing) and the pedestrian path (while crossing). It automatically adjusts the remaining signal time based on that reading to ensure a safe and smooth crossing of the largest possible number of pedestrians,” he explained.

“Amongst the new sophisticated services that would be on display in this year’s edition of Gitex is the Dubai Drive app; an upgraded version of Drivers and Vehicles app; which is now integrated with Salik services. It enables clients instant chatting with customers’ service staff of RTA. They can check the latest transactions such as the payment of parking fees, and top-up Salik account, and earn green points with each transaction completed through smart devices. It enables inquiry about offences, payment of traffic, Salik and parking fines, checking the latest petrol price per litre, buying vehicle plates and applying for a driver license in replacement of lost or damaged one. The app services include renewing vehicle registration or driving license, applying for multiple vehicles owning certificates or distinctive plate in replacement of a lost or damaged one. The app has additional features such as locating ATMs, displaying prayers time and running Google Maps to direct users to their destinations. The upgrade of the app has been built on the views and suggestions of the public;, which underscore RTA’s keenness to engage the public in improving its services and maximise their happiness,” added Al Tayer.

“RTA will also showcase Customers Loyalty Points Programme (nol Plus) enabling nol card users to earn points when using their cards in commuting aboard public transit means. Exhibits include the Enterprise Command & Control Center (EC3); the largest and most advanced control centre worldwide as regards the use of smart technologies. It enables the control and integration of various transit means of RTA and the proper planning of journeys to face various mobility challenges in the Emirate. It will also exhibit the smart shopping, smart yards for testing driver license applicants, manoeuvres, climbing hills, parallel parking and sudden braking, booking of minibuses on demand and the smart towing of vehicles.

“RTA accords special attention to the migration to smart and innovative services. Once it completes the transformation of all services to the smart telephones and e-channels, RTA would focus on the smart mobility and modern technologies supporting the integration between transport services and means,” concluded Al Tayer.