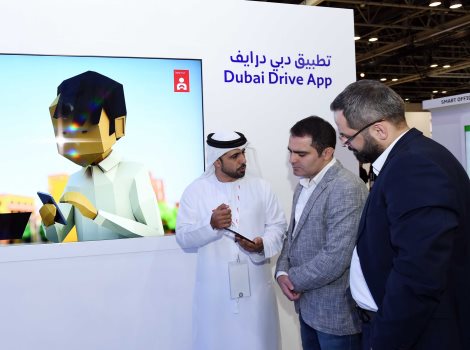 The Roads and Transport Authority (RTA) has launched its smart app branded ‘Dubai Drive’ in Gitex 2017 to boost its smart services offering with the aim of bringing happiness to all beneficiaries of RTA services. The launch of the app concurs with the Third Strategic Goal of the RTA (People Happiness) and the Government initiative (Smart City).

Abdullah Al Madani, CEO of RTA’s Technology Support Services Sector said: “In designing Dubai Drive, RTA had given due consideration to the views, preferences and suggestions of the public as it is always keen on customising its services to the needs of customers. The app has a host of features such as that the user would be required to Sign-up only once, and can use the same Username and Password in all RTA’s apps as well as the Smart Government apps in Dubai. The user’s photograph is displayed, and the app is configured to display the frequently used services. It supports the use of the two secure government payment portals (ePay and mPay) to pay for RTA’s services.

“The user’s documents, such as the driver license, vehicle registration, number plate ownership certificate …etc. can be saved for retrieval when required by other government departments such as the Dubai Police. The app enables users to engage in instant chat with the staffs of RTA customers’ service, and review the latest transactions such as the payment of parking fees and Salik top-ups. It also avails customers a chance to win green points with each transaction processed through the smart systems. Customers can inquire about offences, pay traffic, Salik and parking fines, and inquire about the latest fuel price per litre. Through the app, a customer can buy a number plate, apply for a driver license in replacement of a lost or damaged one, renew vehicle registration/driver license, and apply for multiple vehicle ownership certificates or a distinctive number plate for replacement of a lost or damaged one,” explained Al Madani.

“The underlying objective of launching this app is to make it the best choice of various community segments, especially road users, to ensure realising RTA’s vision of Safe and Smooth Transport for All. The features of the app make it easy to benefit from all RTA’s services and initiatives, which would add to the happiness of users. We thank community members who contributed effective ideas and suggestions to the launch of the app and enriching its contents and features,” added the CEO of RTA’s Technology Support Services Sector.