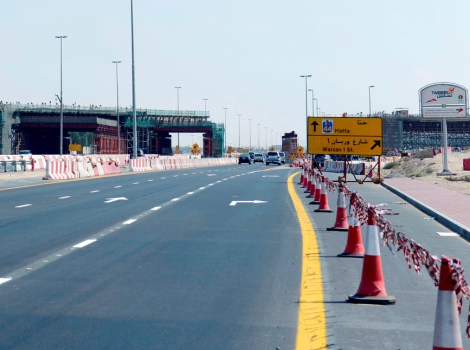 “Works also include widening Al Manama Street in the area between Sheikh Mohammed bin Zayed Road and the entrance of the International City from three to six lanes in each direction. This improvement will increase the intake of the road by 1500 vehicles per hour per lane. Al Manama Street will also be widened in the sector from the entrance of the International City to the Academic City Street from two to five lanes in each direction. The widening will enhance the capacity of this street from 3000 vehicles to 7500 vehicles per hour.

“Phase II of the project includes upgrading the intersection of Al Manama Street with the entrance of the International City by converting it into a surface signalised junction enabling free movement in all directions. Works include constructing a flyover of three lanes in each direction to allow trafficto cross freely over Al Manama Street; which will increase the capacity by 4500 vehicles per hour. The existing surface intersection of Al Manama-Nouakchott Streetswill be upgraded. Instead of allowing traffic movement from Al Manama Streetleftward in the direction of Al Awir Road only, it will be convertedto a signalised junction enabling traffic movement in all directions. Works also include the construction of a two-lane flyover to enable free traffic movement from Nouakchott Street leftward in the direction of the International City Street. The project will increase the street capacity by 3000 vehicles per hour,” he further added.

Phase I
At the start of 2016, the RTA commenced construction works in Phase I of Al Awir Road and Entrance of the International City Improvement Project. Completion rate has so far reached 75% in the project, whichis expected to be opened in the first quarter of 2018. Phase I of the project includes improvement works of Al Awir Road starting from the intersection of the Sheikh Mohammed bin Zayed Road to the R/A of the  Academic City Street.

A free intersection comprising a two-lane flyover will be constructed between Al Awir Road and Nouakchott Street to ensure free movement of traffic coming from Nouakchott Street heading westward to Al Awir Road (in the direction of Dubai city centre). It also provides turns for the trafficrunning from Al Awir Road to the Sheikh Mohammed bin Zayed Road. The project also includes the construction of service roads in both directions of Al Awir Road to ensure a free traffic and separate it from the trafficof the International City, Dragon Mart and Al Warqaa.

Phase I of the project also encompasses the construction of a bridge for pedestrians and cyclists to ease the movement of pedestrians between Al Warqaa and the International City to the business district such as the Dragon Mart and the Vegetables Market. The primary four R/As inside the International City will be upgraded tosignalisedjunctions, and the existing lane will be widened by adding one or two lanes in specific sectors.