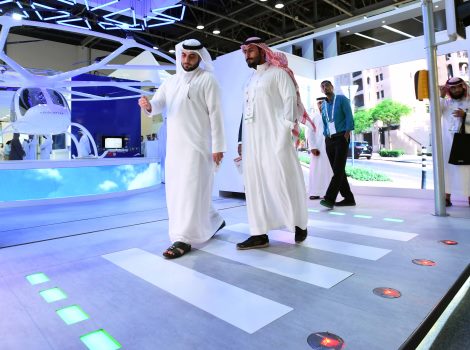 The Roads and Transport Authority (RTA) is displaying the Smart Pedestrian Signal in Gitex 2017 as part of endeavours to keep abreast of the Smart City initiative of the Dubai Government. The technology aims to ensure a safe crossing for pedestrians through carefully planned moves to install the signal in a host of selected locations of similar nature.

Eng. Maitha bin Adai, CEO of Traffic & Roads Agency, said, “The smart pedestrian signal has a smart operation system triggered by sensors connected to a ground optical system synchronised with the operation of the signal. It reads pedestrians’ traffic on the pavement (before crossing) and the pedestrian path (while crossing). It automatically adjusts the remaining signal time according to that reading to ensure a safe and smooth crossing of the largest possible number of pedestrians.”

“The initial results of the trial operation on Al Saada Street showed an improvement in the operational efficiency and the level of traffic safety, following extensive and accurate statistical studies. Expanding the project to other areas of Dubai is governed by a host of parameters such as the variation in traffic and pedestrian intensity and the addition of new facilities nearby crossings. Districts expected to be covered in the second phase of this technology are City Walk, Al Muraqqabat, Al Barsha and others,” she explained.

“The Smart Pedestrian Signal along with the associated system is part of RTA’s efforts under the Smart City initiative and serves the strategic goals of the RTA such as the Smart Dubai, and People Happiness. This project is one of the pioneering innovations developed by RTA across the region,” concluded the CEO of Traffic and Roads Agency, RTA.