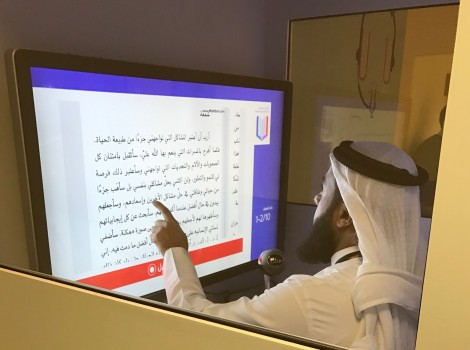 The Roads and Transport Authority (RTA) has reaffirmed its commitment to lend every possible support to the People of Determination in keeping with the Government directives. In this regard, it has gifted numerous audio books recorded in CDs to the Emirates Association of the Visually Impaired in Sharjah. The move is part of RTA’s initiative in support of People of Determination with the aim of diffusing their culture of reading and integrating them in the knowledge drive running across the community segments.

Yousef Jawad Al Reda, CEO of RTA’s Corporate Administrative Support Services Sector said, “We were keen to support the Emirates Association of the Visually Impaired in Sharjah with audio-books prepared by RTA as part of its Read More initiative. It signals RTA’s commitment to its social responsibility to the People of Determination. The move also conforms with the directives of our government to integrate this category, which is a new contributor to the development drive witnessed by Dubai and indeed the entire UAE.

“RTA has finalized the conversion of several books to audio-books thanks to a bunch of 26 volunteer employees who have made audio recordings of those books and saved them in CDs. Relevant centres& societies of People of Determination have been notified to make use of this achievement in enriching the culture of their affiliates. Books have been selected according to certain criteria such as relaying positive concepts, building self-confidence, enhancing determination to cope with life challenges, enriching imagination and boosting ethical values. We have got plans to engage the people in supporting this initiative through self-service machines (Smart Kiosk) in Customer Happiness Centers,” said Al-Reda.

Adel Al Zamar, Chairman of Emirates Association of the Visually Impaired in Sharjah, praised RTA’s valuable initiative in supporting the People of Determination. He expressed hope to see other government bodies follow suit in recording whatever possible audio books for visually impaired individuals.

“We are happy with the books contributed through the Audio Kiosk initiative rolled out by RTA as part of its Read More initiative. RTA’s employees have done a great job in recording these books and supplying them to the library of the Association. The audio library has a serious shortage in the number of recorded materials, and the Association is working on recording audio books for members and affiliates. For this reason, it had established a recording studio with limited resources at its premises run with the assistance of impaired individuals themselves. Thanks for the RTA and volunteering staff who took part in recording those books,” added Al Zamar.