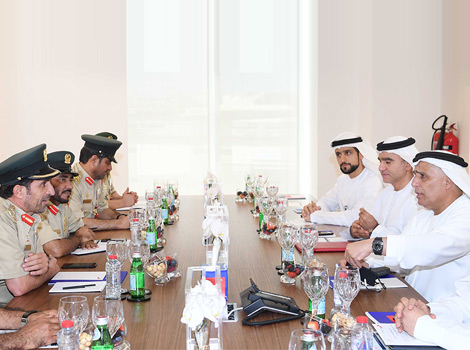 HE Mattar Al Tayer, Director-General and Chairman of the Board of Executive Directors of the Roads and Transport Authority (RTA), has held a coordinative meeting with HE Major General Abdullah Khalifa Al Marri, Commander-in-Chief of the Dubai Police and discussed means of boosting cooperation between the two parties. The meeting focused on the management of traffic movement during mega-events in Dubai, security of public transport means and the enhancement of traffic enforcement measures on the movement of trucks in residential areas.

Topics raised during the meeting, which was held in the Enterprise Command and Control Center (EC3) at the RTA, were highlighted by the Dubai Metro and Tram carriages and the highest international practices. The meeting also focused on the management of traffic movement in Dubai with the aim of reducing the time taken in managing traffic accidents and reinstating traffic back to normal in the shortest time possible. The RTA has a scheme to provide the logistical support needed by the Police during the management of traffic accidents involving the provision of alternative roads, diversions and other measures. When implemented, the project is expected to reduce snarls and the associated expenses by 25%. It will ensure the arrival and clearance of the accident scene within 12 minutes, slash the time taken to clear crashed vehicles, detect accidents ensure rapid deployment before congestion builds up or the occurrence of secondary accidents. The scheme also includes delivering assistance to motorists experiencing vehicle breakdown by removing them from traffic lanes and coordinating their immediate clearance.

Al Tayer and Al Marri discussed traffic bottlenecks in residential areas bordering Sharjah such as Al Mizhar, Al Khawaneej, Oud Al Mateena and Al Muhaisna as well as the efforts of the RTA to ease the mobility of residents of the neighbourhood. Such efforts include construction of road network linking Dubai and the Northern Emirates, and enforcing the ban on trucks movement and worker buses in residential areas adjacent to the northern emirates. The RTA also presented road improvement projects capable of diverting some of the traffic from the Emirates Road such as the extension of Tripoli Street, Al Khawaneej Street, Airport Street, and Al Awir Road. The RTA has introduced improvements of some intersections on Amman Street in a sector parallel to workers quarters. It has been agreed to intensify the traffic enforcement measures on the movement of trucks in the area with the aim of alleviating congestions experienced by residents.

The coordinative meeting also touched on RTA’s needs from Dubai Police to enhance the role of the EC3 such as providing a real-time link of accident data, and providing instant information about emergency road closures. In return, the RTA has provided a meeting room and office for police officers.

Al Tayer commended the strategic partnership between the RTA and the General HQ of the Dubai Police and the existing cooperation in managing traffic movement and enforcement issues. He praised the fruitful coordinative meetings held by the two parties, considering them a direct communication channel for discussing the new developments of both parties. He commended the improved traffic safety level on roads and the safety of various modes of public transport; which is of benefit to both citizens and residents of Dubai.

HE Major General Abdullah Khalifa Al Marri commented on the meeting saying, “These coordinative meetings between the General HQ of Dubai Police and the Roads and Transport Authority (RTA) are of great benefit to the Emirate and the joint business of the two parties. It intensifies the cooperation towards dispensing security and tranquillity between citizens and residents of this kind land.”