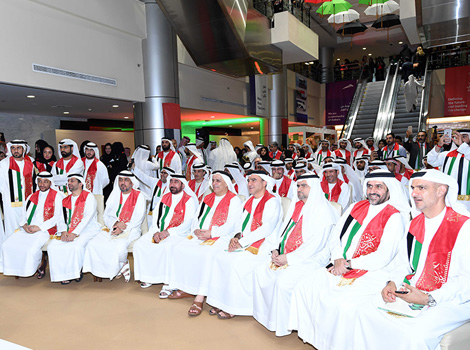 HE Mattar Al Tayer, Director General and Chairman of the Board of Executive Director of Roads and Transport Authority (RTA), has witnessed RTA’s celebration of the 46th UAE National Day. The festivity included heritage events and activities reflecting the Spirit of the Union.

"The National Day is a great event to recall the efforts and strives of the late Sheikh Zayed bin Sultan Al Nahyan, Sheikh Rashid bin Saeed Al Maktoum, and founders of the Federal Supreme Council - Rulers of the Emirates who had built a solid base for our beloved nation. We were privileged by worthy successors to great predecessors to continue the nation-building drive under the wise leadership of His Highness Sheikh Khalifa bin Zayed Al Nahyan, President of the UAE; and His Highness Sheikh Mohammed Bin Rashid Al Maktoum, Vice President and Prime Minister of the UAE and Ruler of Dubai. Our leadership is blessed by the support of His Highness Sheikh Mohammed bin Zayed Al Nahyan, Crown Prince of Abu Dhabi and Deputy Supreme Commander of the UAE Armed Forces, and their Highnesses members of the Federal Supreme Council - Rulers of the Emirates. Under their wise leadership, we are enjoying a boom spanning economic, social, and urban fields that enabled the UAE to carve a great niche among nations.  The achievements on the ground inspire us to pick up the threads of this unprecedented growth in a different era by all standards, and proudly narrate the stories of these courageous men, who have built the key pillars of the nation and people of United Arab Emirates,” said Al Tayer.

“The 2nd of December will remain our pride in a nation that had overcome difficulties and announced its birth in 1971 despite all frustrating challenging and historical circumstances to become the most successful Arab unionist model. The establishing of the nation has ushered the start of an era marked by development and prosperity,” added Al Tayer.

HE Mattar Al Tayer, accompanied by a host of CEOs and directors, walked through the corridors of RTA’s head office. During the tour, he witnessed brilliant events including a mural reflecting the achievements of the founding leader Sheikh Zayed Bin Sultan Al Nahyan, along with the dates indicating the gradual steps of forming the Union. He watched a video that tells the story of Sheikh Zayed's life and his role in building the UAE.

Al Tayer has also toured a Bazar comprising works of some employees reflecting their dreams for micro-projects that cope with their ambitions. He praised the self-driven efforts of these young men and women, which indicate a new vision for work and perseverance amongst the youth of the nation. He visited the Child Corner dedicated to employee’s kids and RTA’s nursery, where he was delighted to see children enjoying the fun of an atmosphere with their faces painted with the colors of the UAE flag.

RTA’s celebrations included a cartoonist of face drawing, and a painter writing the history of the Union’s foundation in sand paintings that raised the eyebrows of everyone. Festivities also included a Henna corner for female employees as a tradition living its moments of glory, marching bands of military and fishermen, and a large traditional kitchen in the courtyard of the building. The parking inspectors also enjoyed the celebrations, as they had a lunch buffet including fine traditional cuisines in the Parking Department at Umm Ramool and Al Ghubaiba.

Also, The Roads and Transport Authority has decorated main roads in Dubai, along with 46 taxis and buses wrapped up with the UAE flag. Decorations extended all the way to the Dubai Water Canal, Headquarters of the RTA, Al Jaddaf Marine station, and the Customer Happiness Centre in Umm Ramool. The Dubai Taxi Corporation and the Public Transport Agency have also celebrated the National Day through various events involving employees and drivers.