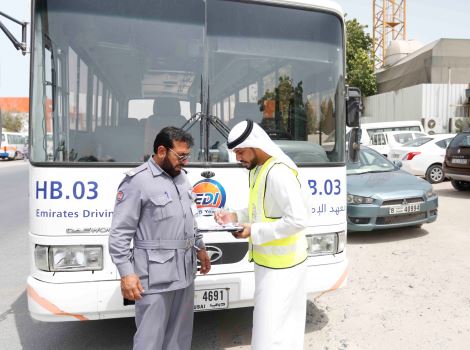 Over five days, the Roads and Transport Authority (RTA) has carried 100 out inspection campaigns targeting driving institutes of heavy vehicles. The move was aimed at checking the soundness of vehicles used for learning and their compliance with the approved standards in a bid to control the performance of facilities in this regard.

“RTA’s Monitoring and Enforcement Department has carried out 100 inspection campaigns over five days targeting driving institutes of heavy vehicles to verify their compliance with the standards set for this activity,” said Mohammed Waleed Nabhan, Director of Monitoring & Enforcement, RTA Public Transport Agency. “The inspection also covered the delivering of the unified training module, the nine theoretical lectures, and the prescribed number of training lessons. The objective of the campaign is to enhance the performance level of these facilities, especially as the heavy vehicles sector is of great importance to the economy of Dubai. It is also part of RTA’s standing commitment to ensuring the safety of road users; which echoes its vision of providing Safe and Smooth Transport for All,” he continued.

“The campaign has resulted in spotting violations amounting to 74% of cases reported. They were mostly related to the standard training module, the nine theoretical lectures, specifications of the learning vehicles, abandoned vehicles in a training centre (explicit violation of Order (6), Article (9), and the expiry of instructors’ permits among others.

“The RTA has offered violators a grace period to redress their status as campaigns will be relaunched to verify once again their compliance with the standards set for this business. The RTA attaches paramount importance to this type of vehicles as it constitutes one of the key challenges of ensuring traffic security and roads safety,” added Nabhan.