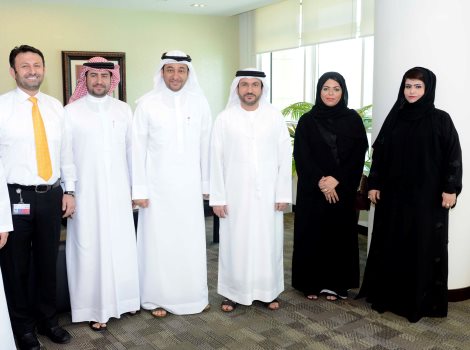 The Roads and Transport Authority (RTA) has received a visiting delegation from the Ministry of Health and Prevention and briefed them on RTA’s asset management practices covering procurement plans, performance follow-up, stocktaking, numbering and replacing of assets. The briefing included the system adopted by the Department for tracking, monitoring and maintaining RTA’s assets; which is in line with the highest international standards.

The meeting was held in RTA Head Office in the presence of Nasser Bu Shehab, CEO of Strategy and Corporate Governance, Saeed Hamad Al Ramsi, Director of Assets from the RTA, in addition to several executives from both parties.

“The RTA is keen on boosting cooperation with government, semi-government and federal entities. The visit of the Ministry of Health and Prevention delegation is part of RTA’s strategy aimed at sharing knowledge and expertise with various relevant bodies,” said Bu Shahab. “During the gathering, the RTA gave a full overview of its asset management system, processes and plans. RTA’s model is significant as it has huge assets comprising roads, bridges, tunnels, metro, tram, buses, taxis, and marine transit modes among others. Plans have been developed to sustain and maintain these assets for years to come,” he added.

“The RTA made a visual presentation explaining the organisational chart, strategic plans, goals, and objectives of the RTA as well as initiatives relating to asset management, corporate structure and roles & responsibilities of the Department. RTA officials elaborated the lifecycle of asset and future objectives of the Department to enhance its asset sustainability. A brief account was made about the awards as well as the local, regional and international certificates obtained by the Department. Issues covered procedures of procuring new assets as well as stocktaking, the keeping of assets (registration and numbering), and the scrapping of assets through a specific process.

The visiting delegation praised this effective communication with RTA’s Assets Management Department; which familiarised them with the job nature of the Department and how to apply the highest international practices. It also commended the role of the RTA in attracting experts in various fields of relevance, and adopting the best global models capable of realising RTA’s objectives and goals. Such a drive fits well with the directives of the Dubai Government aimed at ranking Dubai as the ideal environment for creative corporate performance.