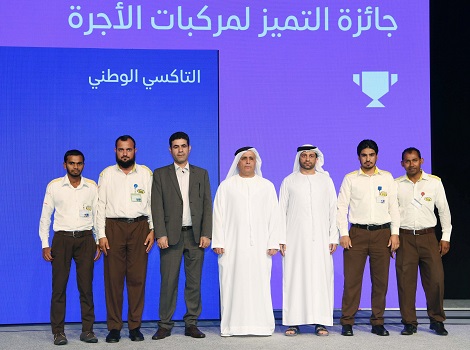 The Roads and Transport Authority (RTA) honoured its strategic partners including ministries, government institutions and media representatives as well as top 50 outstanding cabbies from Dubai Taxi Corporation and other franchise companies as part of Dubai Taxi Excellence Awards. The RTA also felicitated the most frequent users of mass transit modes as part of the Public Transport Day Celebrations in recognition of their cooperation and effective participation in supporting RTA’s efforts from inception.

The recognition ceremony was attended by HE Mattar Al Tayer, Director General and Chairman of the Board of Directors of the Roads and Transport Authority, HE Sultan Butti Bin Mejren, Director-General of Dubai Lands and Properties Department, Maj. Gen. Mohammed Saeed Al Marri, Assistant Commander-in-Chief of Dubai Police for Community Happiness and Logistics Affairs; Abdulla Al Kathiri, Director General of the Federal Authority for Land and Marine Transport; Ahmed Thani Al Matrooshi, Managing Director of Emaar Properties, and scores of senior officials from governmental bodies and media institutions.

Starting his speech, HE Al-Tayer expressed gratitude to His Highness Sheikh Mohammed bin Rashid Al Maktoum, Vice-President and Prime Minister of the UAE and Ruler of Dubai, for his guidance, care and unlimited support for RTA’s plans and projects. He also thanked His Highness Sheikh Hamdan bin Mohammed bin Rashid Al Maktoum, Crown Prince of Dubai and Chairman of Dubai Executive Council; and His Highness Sheikh Maktoum bin Mohammed bin Rashid Al Maktoum, Deputy Ruler of Dubai and Deputy Chairman of Dubai Executive Council for their continued follow-up of RTA’s business drive. Al-Tayer noted that the clear-cut vision, care and continuous support accorded to the RTA by the leadership underlined the tall achievements & successes of the RTA. He mentioned the Dubai Metro, Tram, Water Canal, and several road projects as examples, in addition to beefing up public transport with world-class buses, and marine transit means such as the Dubai Ferry, Water Bus, Water Taxi, and traditional Abras.

Al Tayer expressed his gratitude and appreciation to RTA's strategic partners for their efforts and cooperation. “Thanks to these efforts, the RTA has become one of the most advanced and distinguished organisations not only at the local level but also at the regional and global levels. Such partnerships also helped the UAE to be ranked as Number One in roads quality worldwide in the last four years,” he said. Al Tayer praised the cooperation of Dubai Police with the RTA in overcoming key challenges facing Dubai emirate in connection to traffic safety, culminated by approving the Guidelines of the Traffic Safety Strategy.

He also praised the support of Dubai Municipality in allocating lands needed for infrastructural projects such as roads and transportation and accelerating the issuance of permits for building RTA’s facilities. The RTA is determined to push this partnership into broader horizons through further communication and coordination towards realising the vision of our government.

Al Tayer commended the prominent role of written, audio and visual media channels in acquainting the public with RTA’s projects, programs and initiatives. “We are closely monitoring all stuff broadcasted in the media along with the associated views and comments, especially those related to community members. We study and analyse these materials in order to benefit from them, as our primary role is to offer better services to the community.

During the ceremony, a movie was shown about RTA’s achievements along with a profile of the daily life of commuters on public transit means. Al Tayer then felicitated RTA’s strategic partners comprising ministries, public entities and media channels. He also honoured three of the most frequent users of public transport means where each winner was awarded AED50 thousand, in addition to the winners of Public Transport Day Event’s competition.