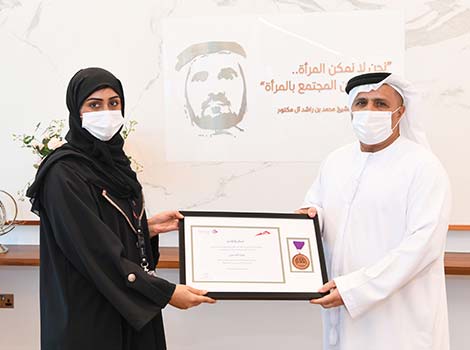 The Women Committee at the Roads and Transport Authority (RTA) held a series of events marking the Emirati Women’s Day held this year under the theme ‘Women: Ambitions & Inspiration for the Next 50 Years. ’Celebrations of the event were launched in response under the directives of Her Highness Sheikha Fatima bint Mubarak, Chairwoman of the General Women's Union, President of the Supreme Council for Motherhood and Childhood, Supreme Chairwoman of the Family Development Foundation (Mother of the UAE).

His Excellency Mattar Mohammed Al Tayer, Director-General, Chairman of the Board of Executive Directors of the Roads and Transport Authority felicitated excellent-performing female employees in recognition of their efforts, loyalty and dedication to their jobs. The move echoes the directives of the government and RTA’s leadership to pay tribute to the specialist achievements of Emirati women and encourage them to excel and achieve even better results.
RTA hosted Her Excellency Dr Farida Al Hosani, Executive Director of Communicable Diseases at Abu Dhabi Public Health Centre, Official Spokesperson for the UAE Health Sector, in a virtual session attended by RTA’s female leaders and employees. The session aimed to shed light on several topics such as the role of Emirati women in crossing to the next 50 and their contributions to the health sector, in addition to the most prominent features and future of female leaders.

“Emirati women have proved their merit in tackling challenges and playing an active role in a variety of fields, especially the transport sector, which has recovered as much as 70% of ridership recorded during the pre-Covid-19 levels. Such a positive indicator of returning to normal life and co-living with the precautionary measures in place,” added Al Marri.