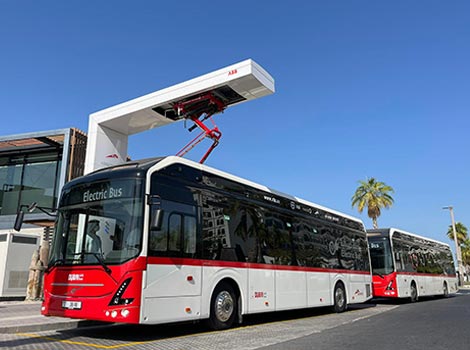 The two buses are fitted with Opportunity Charging technology, which is experimented for the first time in Dubai. Buses are charged by a standing electric charger supplied by ABB Group at La Mer South. A night electric charger is provided at Al Quoz Bus Depot to run the night charging when the two buses are out of service. Therefore, buses can be electrically charged either through Pantograph using a standing arm under which the bus is parked at La Mer, or cables connecting direct and alternate currents (DC and AC).

Each bus is equipped with modern batteries that enable it to travel 200 km when fully charged. The length of the distance travelled is a function of several factors such as the terrain of the road, temperature, and the operation of the air conditioners. Each bus has 38 seats in addition to 3 foldable seats, a place for People of Determination, and an interactive display screen.

“This unique and comprehensive electric bus charging system that uses the Opportunity Charging technique for operating electric buses on a specific path responds to the initiative of His Highness Sheikh Mohammed bin Rashid Al Maktoum, Vice-President, Prime Minister of the UAE and Ruler of Dubai themed: ‘Green Economy for Sustainable Development.’ It is part of RTA’s initiatives to support the use of eco-friendly vehicles and sustainable transit means. It concurs with the Dubai Government’s energy and carbon strategy aimed to make Dubai a model in the efficient use of energy and reduced carbon emissions,” said His Excellency Mattar Mohammed Al Tayer, Director-General, Chairman of the Board of Executive Directors of Roads and Transport Authority.

“The success of deploying and operating electric buses and vehicles as part of RTA’s mass transit fleet hinges largely on the availability and reliability of the charging technology, and whether it supports the continuous operation of buses without stopping or having to return to the charging stations.

“RTA attaches top priority to environmental conservation and power-saving policies and sets safety and environmental sustainability as one of its strategic goals. It, therefore, seeks to keep pace with the latest technologies of manufacturing buses, electric batteries, and various charging systems. It underscores the intention to add electric buses to RTA fleet in future to ensure the operation of safe, smooth, and sustainable mass transit means. It is recalled that RTA had launched a series of projects and initiatives to leverage sustainable transport including the trial run of electric buses and the operation of hydrogen or water-powered taxis,” concluded Al Tayer.

“Government departments are keen to make concerted efforts towards realising the vision of His Highness Sheikh Mohammed bin Rashid Al Maktoum, Vice-President, Prime Minister of the UAE and Ruler of Dubai, to transform Dubai into the smartest and happiest city in the world besides cementing the profile of the emirate as a global destination of green economy and sustainable development. Dubai’s Green Mobility Initiative 2030 aims to stimulate the use of sustainable transit means and align them with the strategic goals of the emirate in terms of sustainability, air quality and the reduction of greenhouse gas emissions,” he noted.

“The incentives package launched by the Dubai Supreme Council of Energy of which DEWA is part has encouraged green mobility and increased the number of electric cars in Dubai. We hope that this new initiative from RTA would increase the number of environmentally friendly electric buses and encourage community members to use public transport and electric vehicles. This particularly fits with the spread of green charging stations of DEWA, which now exceed 300 stations offering 530 charging points across Dubai,” concluded Saeed Mohammed Al Tayer.

Manish Sahi, Vice President, Volvo Bus Corporation stated “This trial of Volvo Electric buses is a coming together of RTA Dubai, a leading public transport provider in the region; Volvo Buses, a leader in electromobility globally; ABB, leading charging infrastructure provider and our exclusive local partner for Volvo Buses in Dubai, Al Futtaim Auto & Machinery Company (FAMCO).  We are excited about the possibilities electric buses will open up for cities like Dubai. Without emissions and noise, you can even build bus stops indoors.

“Volvo Electric buses will enhance travelling experience not only for passengers but also drivers and other road users, making cities more attractive for their inhabitants. This trial is a strong step forward towards achieving Dubai’s goal of being the world's happiest city. We are excited to be RTA's partner in providing sustainable and environmentally friendly public transportation.”

Frank Muehlon, President of ABB’s E-mobility Division said, “We’ve witnessed a great example of private-public partnerships at RTA electric Bus Project, where it brought together key stakeholders from the Transport, Utility and Automotive industries. With more than 460,000 chargers installed worldwide in more than 88 countries and along with our global partners like Volvo Buses and local partners like Al Nabooda MENA Mobility.”

Ramez Hamdan, Managing Director of Al Futtaim Auto & Machinery Company (FAMCO) stated: “We are excited to be part of this highly strategic initiative and we have worked closely with our partners at (RTA) to provide them with the optimal solution for their strategic vision and we have partnered with the Volvo Bus Corporation to ensure our teams deliver the highest service, maintenance, response and support levels to our valued customer, the RTA.”

RTA managed to convert 50% of the total Dubai Taxi fleet into environmentally-friendly hybrid vehicles in 2020. It intends to convert the entire taxi fleet to hybrid and electric vehicles by 2027. In December 2019, it launched the trial run of the first hydrogen taxi in the Middle East and deployed it as a limo service at the Dubai International Airport.