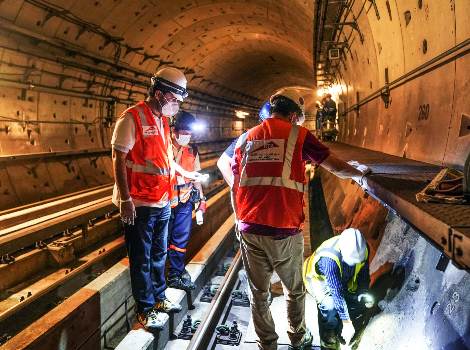 RTA’s Rail Agency capitalised on the recent lockdown period of the National Disinfection Programme by carrying out intensive maintenance works on the Dubai Metro network.

“We have succeeded in turning the lockdown of the metro network forced by Covid-19 pandemic into an intensive maintenance period for the Dubai Metro infrastructure, thanks to the additional working hours available to carry out essential/planned maintenance activites,” said Mohammed Al Amiri, Director of Maintenance, Rail Agency, RTA.

“RTA teams managed to carry out key maintenance activities of some parts of the metro railways in a record time equal to 50% shorther than the planned period. Teams also accomplished preventive maintenance works in 9 railway curves vis-à-vis planned 5 curves, thus recording a completion rate of 180%.
“During the national disinfection period, we completed the preventive maintenance of rail pads at an achievement rate of about 175% compared to the planned period. RTA also expedited the periodic inspection of rail tracks on the Red and Green lines at a completion rate of 170%.

“We have also completed 50% of metro tunnel preventive maintenance works against 30% of the targeted period, thus recording a completion rate of 170%. We also advanced the tunnel cleaning works and carried it out in April instead of the scheduled time in June, which saved about 25% of the time allocated.

“RTA will continue the efforts to sustain its assets and carry out optimal periodic and preventive maintenance activites at the highest standards. It seeks to capitalise on the current challenges constructively for the safety of metro users in line with its vision of Safe and Smooth Transport for All.”