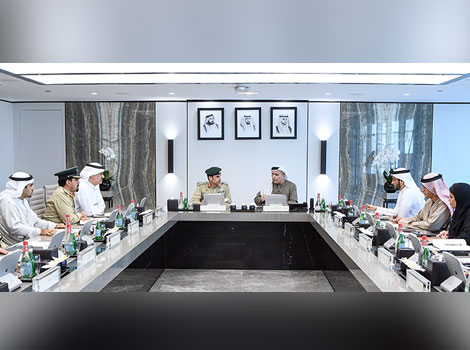 His Excellency Mattar Mohammed Al Tayer, Director-General and Chairman of the Board of Executive Directors of the Roads and Transport Authority (RTA) and Commissioner-General for Infrastructure, Urban Planning and Wellbeing pillar at the Dubai Council, has held a coordinative meeting with His Excellency Major-General Abdullah Khalifa Al Marri, Commander-in-Chief of the Dubai Police and Commissioner-General for Citizens Services pillar. The meeting was held in the presence of HE Ahmad Abdul Karim Julfar, Director-General of the Community Development Authority in Dubai and several officials from Dubai Municipality.

The meeting, which was held at RTA Head Office, discussed the implementation of the initiative of His Highness Sheikh Mohammed bin Rashid Al Maktoum, Vice-President and Prime Minister of the UAE and Ruler of Dubai, to build 12 integrated councils in Dubai neighbourhoods to serve as community meeting points and to for citizens to organize social events. The meeting looked into the standards of selecting locations for councils; which are required to be close to main roads, mosques, public amenities or densely populated areas.

Attendees examined Dubai Police requirements for these councils such as the availability of government and community services and offering entertainment activities. They also discussed the key components of councils such as a multi-purpose hall, youth majlis, library, administrative offices and service facilities.

The meeting agreed that the Infrastructure, Urban Planning and Wellbeing pillar should cater to the selection of locations for building these councils, follow-up designs and oversee construction works. The Citizens Services pillar should chart out the activities and requisites of councils, and the running of activities towards serving the community. The meeting also reviewed the timetable for constructing these councils.

HE Mattar Mohammed Al Tayer opened the meeting by stressing the importance of acting in team spirit towards realising the Dubai Council’s strategy for enhancing Dubai competitiveness within the scope of the Infrastructure, Urban Planning and Wellbeing  pillar “Achieving these objectives warrants undertaking excellent projects and initiatives capable of thrusting Dubai into a fast growth city over the next 50 years, and setting out an example for the region and the globe in addressing people’s wellbeing and happiness.” said Al Tayer.

“We will endeavour to accomplish the residential councils as quickly as possible such that they will contribute to mapping out programmes and activities for cementing the links and communication between various community segments. The underlying objective is to make these councils an important tool for enriching the life of Dubai’s citizens,” he added.

HE Major General Abdullah Khalifa Al Marri reiterated their full and instant commitment to carry out the directives of His Highness Sheikh Mohammed bin Rashid Al Maktoum aimed at boosting the happiness of all Dubai’s citizens. He pledged to pursue the transparent and welcoming leadership model of HH in identifying the needs of citizens and optimising the use of resources and modern technologies to provide a decent living for all. Delivering such services at the top global standards renders Dubai the best and most secure living place in the world.