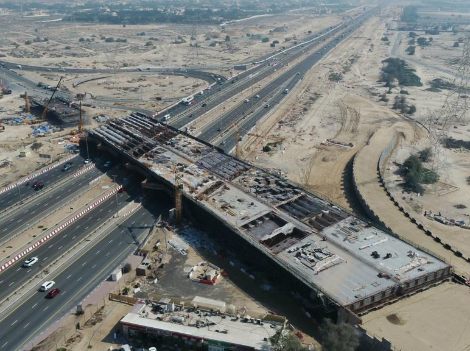 The Roads and Transport Authority (RTA) has announced that the AED2 billion improvement project to widen the Dubai-Al Ain Road has reached a completion rate of 60%. The project is aligned with His Highness Sheikh Mohammed bin Rashid Al Maktoum, Vice President and Prime Minister of the UAE and Ruler of Dubai’s vision for the emirate for the next 50 years to meet the needs of urban development and population growth across the Emirate.

Upon completion, the project will double the road’s capacity from 6,000 to 12,000 vehicles per hour per direction and will also cut the journey time on Dubai-Al Ain Road, from Bu Kadra junction to Emirates Road junction, from 16 to 8 minutes during peak hours. Benefiting 1.5 million people, the project will eliminate tailbacks that used to extend two kilometres.

His Excellency Mattar Mohammed Al Tayer, Director-General, Chairman of the Board of Executive Directors of the Roads and Transport Authority (RTA) said: “The RTA, under the follow up of His Highness Sheikh Hamdan bin Mohammed bin Rashid Al Maktoum, Dubai Crown Prince and Chairman of the Executive Council of Dubai, continues to work on vital projects that serve the needs of the community and support the emirates development journey. The Dubai-Al Ain Road Improvement Project is one of the key strategic projects that aims to improve the quality of life in the city and achieve happiness for the community while also strengthening Dubai’s position amongst the world’s safest cities in traffic safety.”

The project’s works include constructing a flyover of four lanes in each direction that can be widened to five lanes in the future and improving the existing ramp to serve the traffic from Dubailand Residential Complex heading westwards to Dubai-Al Ain Road in the direction of Dubai. A new ramp is being constructed to serve the traffic from Dubai heading northwards to Academic City and Dubai Silicon Oasis. The works, which are expected to be completed in the second quarter of next year, also include the construction of service roads on both sides of Dubai-Al Ain Road along with turns to serve development projects.

“The project will see improvements to the existing Nad Al Sheba junction to serve the traffic movement from Dubai-Al Ain Road to Nad Al Sheba area and vice versa. Other improvements underway cover inward and outward surface roads in Nad Al Sheba, which are scheduled for completion during the second quarter of this year. The intersection of Al Meydan Road with Dubai-Al Ain Road will also be linked with Al Manama Road through a flyover of four lanes in each direction. The existing bridge at the intersection of Al Meydan Road and Dubai-Al Ain Road will be upgraded to serve the development projects of Meydan,” His Excellency said.

The improvement of the Dubai-Al Ain Road project extends 17km from the intersection of the Emirates Road to the intersection of Bu Kadra with Ras Al Khor. It covers the widening of the road from three to six lanes and constructing service roads on both sides to ensure a smooth and safe traffic flow.

Overall, the project includes the construction of six main junctions to serve residential communities on both sides of the Dubai-Al Ain Road such as the Dubai Silicon Oasis, Dubailand Residential Complex, Liwan and Dubai Design District. The bridges at the six junctions extend 6,600 metres with slopes extending 4,900 metres.

As part of the project, improvements will cover the intersections of the Dubai-Al Ain Road with the Emirates Road, Sheikh Zayed bin Hamdan Al Nahyan Road, Nad Al Sheba Road, Al Meydan Road and Ras Al Khor Road. Last year, RTA opened the intersection of Dubai-Al Ain Road with Sheikh Mohammed bin Zayed Road. The intersection, which has a total capacity of 36,000 vehicles per hour in all directions, has helped to streamline traffic movement from Al Qusais on the Sheikh Mohammed bin Zayed Road in the direction of Al Ain.

The intersection of Sheikh Mohammed bin Zayed Road with Dubai-Al Ain Road includes four ramps of two-lanes extending 2,600 metres to ensure a free traffic flow at the intersection. According to RTA, the existing bridge on the Sheikh Mohammed bin Zayed Road will be widened from three to six lanes in each direction in addition to constructing service roads on both sides. A 220-metre bridge of two-lanes was constructed on the junction of Sheikh Zayed bin Hamdan Al Nahyan Street and Dubai-Al Ain Road to create a U-Turn for motorists coming from Dubai.