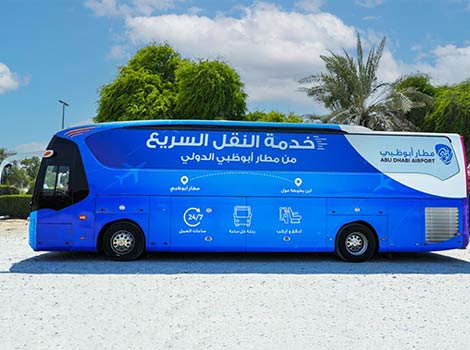 Currently, this service is only dedicated for passengers flying Wizz Air. The bus fare will be included in the Wizz Air tickets. The coach buses on this route will be equipped with passenger luggage facilities.

Ahmed Hashim Bahrozyan, CEO, Public Transport Agency, RTA, expressed deep satisfaction over the signing of the agreement with Capital Express For Rapid Intercity, which will greatly enhance Dubai-Abu Dhabi transport services, as well as those for travelers departing from Abu Dhabi International Airport.

“Joining forces with the private sector will strengthen RTA’s public-private partnership, which RTA always seeks to undertake as a means of exchanging experiences and enhancing its public service offerings. It comprises the extension and enhancement of UAE's transport network by offering bus services within cities, including Abu Dhabi,” said Bahrozyan.

“Through the agreement, Abu Dhabi International Airport will be connected with Dubai's Ibn Battuta Bus Station, RTA and Capital Express For Rapid Intercity will cooperate to lift passengers between the two emirates, and Capital Express will provide buses to transport passengers between Dubai's Ibn Battuta Station and Abu Dhabi International Airport,” added Bahrozyan.

Al Ansari commended RTA’s efforts in securing boarding platforms in Ibn Battuta Station, as well as Abu Dhabi Airports Company and the Integrated Transport Centre (ITC) of the Department of Municipalities and Transport in Abu Dhabi for their continuous support of Capital Express For Rapid Intercity as an express road transport service provider.