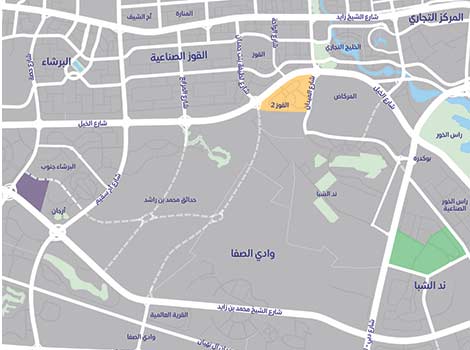 Dubai’s Roads and Transport Authority (RTA) has awarded a contract for constructing internal roads project at three residential communities namely Al Quoz 2, Nad Al Sheba 2 and Al Barsha South 3. The network, which spans 34.4 km in length, is expected to be completed in the second half of 2022. RTA is undertaking this project in response to the directives of His Highness Sheikh Mohammed bin Rashid Al Maktoum, Vice-President, Prime Minister of the UAE, Ruler of Dubai, and the orders of His Highness Sheikh Hamdan bin Mohammed bin Rashid Al Maktoum, Dubai Crown Prince, Chairman of the Executive Council. Such directives call for improving the infrastructure of residential areas to cope with the demographic and urban growth of residential areas, uplift the living standard and increase the happiness of residents.

“Undertaking the internal roads project translates the commitment of the RTA to improve the infrastructure of roads, streetlights, and rainwater drainage systems in residential areas. The internal roads project at Al Quoz 2 covers the construction of an internal roads network extending 16 km in an area situated between Al Khail and Al Meydan Roads. The scope of the project also includes infrastructure works such as rainwater drainage and streetlights,” explained His Excellency Mattar Mohammed Al Tayer, Director-General, Chairman of the Board of Executive Directors of the Roads and Transport Authority.

“The internal roads network at Nad Al Sheba 2 covers the construction of roads extending 12 km along with parallel parking and streetlights besides linking with the stormwater and sewage networks. An assessment will be carried out to the existing internal roads extending 27 km from engineering, traffic safety and rainwater drainage perspectives. Nad Al Sheba 2 is a residential area bordering three main roads namely, The Dubai – Al Ain Road westwards, Nad Al Hamar Street eastwards and southwards, and Al Manama Street northwards. The project will enhance the efficiency of the traffic flow and traffic safety in the area by improving the entry/exit points, paving streets that serve all residential plots in the area in addition to providing two new entry/exit points from and to Al Manama and Nad Al Hamar Streets to improve the link with the surrounding areas,” commented RTA’s Director-General, Chairman of the Board of Executive Directors.

It is noteworthy that RTA is currently undertaking internal roads extending 77 km comprising of 68 km of single carriageways and 9 km of collector dual carriageways at Al Khawaneej 2. The contractor is working on the final touches of the project.