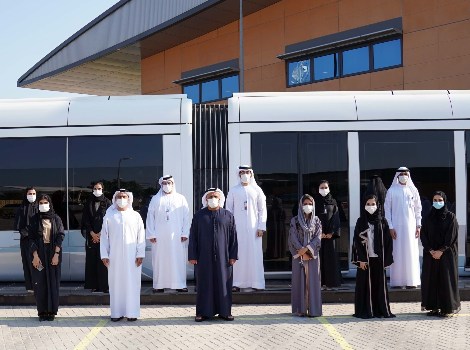 His Excellency Mattar Mohammed Al Tayer, Director-General, Chairman of the Board of Executive Directors of the Roads and Transport Authority (RTA) has launched the electronic platform for railway engineering information. The platform contains about 800 thousand documents relating to assets of the Red and Green Lines of the Dubai Metro. It also contains data about the Rail Agency, consultants, project contractors, rail operators and impacted bodies.

“The platform ensures the accuracy, speed and accessibility to information, documentation of engineering changes in assets, and provides multiple options for data management. RTA has completed the training of beneficiaries of the platform, published technical manuals consistent with top international practices, and linked the platform with the maintenance system. During the first quarter of this year, all processes relating to the management of engineering changes, operations and maintenance will be automated. Later on, documents related to the Dubai Tram and Route 2020 will be uploaded,” noted Al Tayer.

“As part of its efforts to enhance the environmental safety, reduce power consumption and curb carbon emissions, RTA carried out the green buildings initiative in Dubai Tram to reduce power consumption at the Marina Towers Station and the Tram Depot. The initiative uses an evaporation system to reduce the temperature by installing cooling pads to reduce the temperature of the air entering the station. It contributed to reducing the outside air temperature by 8 to 10 degrees Celsius, and resulted in energy savings by 10 to 15%,” he explained.

“RTA also implemented an air-conditioning and air quality control system that analyses the weather condition and the air quality inside the stations by using algorithms that determine the operational times and mechanism of the air-conditioning system. The initiative contributed to reducing power consumption by 11%. RTA also implemented an initiative to recycle the condensed water generated by the cooling process in a special tank, and reuse this water in cooling, cleaning, maintenance and irrigation processes. The initiative has been implemented successfully at the Marina Towers Station,” elaborated Al Tayer.

Al Tayer reviewed the results of 17 improvement initiatives rolled out by the Rail Agency in 2020. The Agency is set to introduce 74 other initiatives this year that cover a variety of fields namely innovation, future foresight, asset sustainability, digital transformation, 4th industrial revolution, customer happiness, and the well-being of the community. Initiatives also relate to issues such as improving the operational efficiency as well as streamlining and integrating new transport sectors and means.

Al Tayer was acquainted with the future developments of the Rail Agency. Options include improving the training Dubai Tram drivers through the use of simulative technology, smart field inspection, and availing of the manufacturer’s technical support in maintenance operations. He also inspected the remote train-condition monitoring system at the Engineering Systems Control Centre. The system monitors the condition of railway diversions, railway and trains. It also identifies faults with high accuracy in an automated process besides assisting in calculating the lifespan, better planning of maintenance operations and applying the variable maintenance concept.

Al Tayer reiterated RTA’s keenness to employ the digital revolution and artificial intelligence, and utilise the huge stock of RTA’s data in planning smart transportation, and improving the transport efficiency and customer experience.