(Shakri: Tests aimed at assessing solutions to the first and last mile challenge) 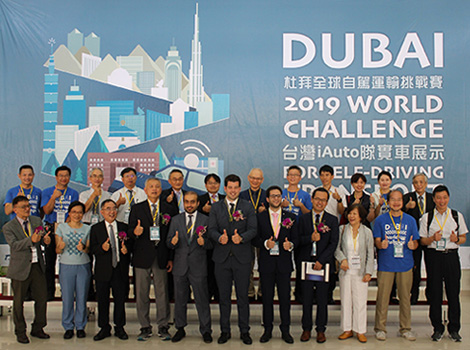 A delegation from Roads and Transport Authority (RTA) has recently visited several universities and start-ups in Taipei (Taiwan) and Sydney (Australia) participating in Dubai World Challenge for Self-Driving Transport.  Tests were meant for the second-tier of participants (Start-ups), and third-tier (Academia – International). Tests were restricted to entities shortlisted for the Challenge following a series of theoretical and field assessments.

“RTA visited several Sydney Technology Universities and startups (iAuto) to assess the models they have developed for solving first and last-mile challenge i.e. ability to provide easy access to residential and other destinations while addressing security and safety requirements. During the visits, test vehicles were subjected to various climatic conditions such as rain and fog,” said Adel Shakri, Director of Planning and Business Development, Public Transport Agency and Head of Dubai World Challenge for Self-Driving Transport Committee.

The Challenge was launched by HE Mattar Al Tayer, Director-General and Chairman of the Board of Executive Directors of RTA, during Los Angeles CoMotion Congress, USA in November 2017 in collaboration with Khalifa University and NewCities International Foundation.

“Having identified finalists, the Challenge winners will be announced on 15 October 2019. The Challenge is the biggest global platform for leading firms, and R&D centres to implement this technology in Dubai,” said Shakri.

“The Challenge is part of RTA’s efforts to support the pioneering efforts of Dubai to boost self-driving transport and its commitment to realise the Government vision for transforming 25% of total mobility trips in Dubai into driverless trips by 2030. It contributes to RTA’s first strategic goal (Smart Dubai) as well as the Dubai Government’s Smart Dubai initiative. It targets leader companies, start-ups as well as local and international universities. Through this initiative, RTA is seeking to bring together prominent experts, specialists, policymakers, technology drivers, researchers and academia.

More than $5,000,000 (five million US Dollars) are up for grabs in the Challenge as follows: $3 million to leader companies, $1.5m to start-ups, and $600,000 dollars to UAE-based and international universities and academia. The Challenge has become a key pillar of RTA’s strategy and paves the way for turning smart mobility initiatives into a reality,” concluded Shakri.