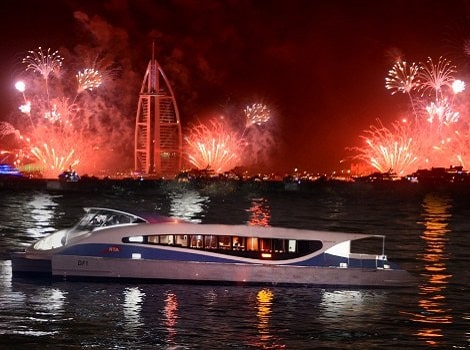 Dubai’s Roads and Transport Authority (RTA) has unveiled special offers and premium services for a spectacular firework show on New Year’s Eve 2021 (Thursday 31st December 2020) aboard marine transit modes (such as the Dubai Ferry, Waterbus and the Abra). The event underlines RTA’s efforts to entertain various nationalities, visitors and tourists descending on Dubai from all over the world to celebrate this annual event.

Mohammed Abu Bakr Al-Hashmi, Director of Marine Transport, Public Transport Agency, Roads and Transport Authority, credited those services to RTA’s continuous efforts to engage customers and offer them a superb opportunity to savour thrilling fireworks display on the New Year’s Eve while being on aboard various marine transit modes (Dubai Ferry, Water Bus and Abra). “Watching stunning firecrackers from the famed Burj Khalifa, the spectacular Burj Al Arab and the posh Atlantis during a charming tour of the Dubai Waterfront is bound to bring unforgettable memories to marine transit riders including residents, visitors and tourists,” he noted.

“Individuals interested in availing this service can call RTA’s dial-free number (8009090) or send e-mail to (wtbook@rta.ea) to learn more about the Water Bus, Dubai Ferry and Abra journeys. Dubai Ferry cruises will start from 09:00 pm on the New Year's Eve and continue up to 01:30 am (of the following day). The Water Bus and the Abra journeys will start at 10:30 pm and end at 01:30 am (of the following day). The air-conditioned Abra will offer service from the Marina Mall station (Dubai Marina) at a fare of AED 125 for adults, children under 2 for free," continued Al Hashmi.

“Dubai Ferry journeys will start from the Marina Mall Station (Dubai Marina), Ghubaiba Station (Dubai Creek) and the Sheikh Zayed Road Station (Dubai Water Canal). The fare is AED300 for silver class and AED450 for gold class, with 50% discount for children aged 2 to 10, and free for infants (less than two). Abra journey will start from Jaddaf Station, Dubai Festival City Station and Ghubaiba Station at a fare of AED125 for adults, and free for infants under 2,” explained the Director of Marine Transport, Public Transport Agency.

“RTA would wish to avail this opportunity to share the joyful moments with jubilant celebrators of the New Year. Dubai would be turned out in a festive gear in places like, the iconic Burj Khalifa; the tallest building on the planet. The event promotes RTA’s excellent marine transit services on the day, and its efforts to bring happiness to customers, especially marine transport riders,” he further added.

“The Dubai Ferry, Water Bus and Abras have special appeal to Dubai residents, visitors and tourists, thanks to the picturesque coastal line of the city, which boasts of an array of fabulous tourist attractions such as the World Islands, Nakheel Islands, Dubai Water Canal, heritage destinations and deluxe hotels. The launch of this premium service will add fresh momentum to the marine transit modes during the event,” concluded Mohammed Abu Bakr Al-Hashmi, Director of RTA’s Marine Transport.