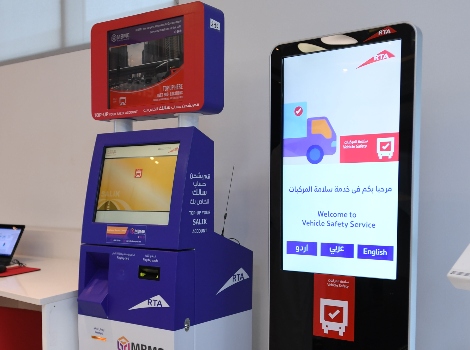 In the first seven months of 2019 year, smart service systems of Roads and Transport Authority (RTA) have processed as much as 178,009 transactions. Those smart systems, which operate 24/7, comprise 22 self-service kiosks, 14 smart counters, and the Call Centre (8009090).

“From January to July this year, the smart devices have processed 168,157 transactions such as drivers and vehicles licensing, and certificates among others. The Call Centre (800909) has processed 9,852 transactions such as the renewal/replacement of vehicle registration, renewal/replacement of driver license, payment of fines and recovering the PIN of nol card, to name a few.

“Through these smart initiatives, RTA supports Dubai Paperless Transactions Strategy aimed at achieving full digital transformation of Dubai Government transactions by 2021. In this context RTA installed 22 self-service kiosks at 18 locations and 14 smart counters in happiness centres and ferries. The I-Counter is a miniature self-service machine aimed to ease the pressure on regular self-service machines. It processes the same transactions and services except for the cash payment and printouts,” explained Mahboub.