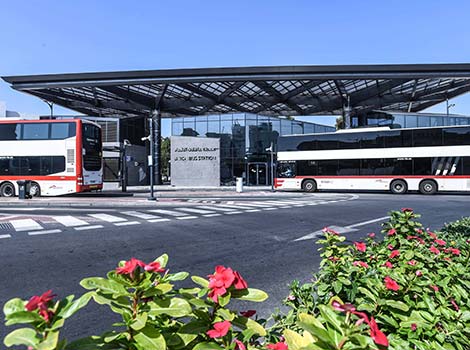 His Excellency Mattar Mohammed Al Tayer, Director-General, Chairman of the Board of Executive Directors of Roads and Transport Authority (RTA), revealed that RTA’s precautionary measures and initiatives applied to the scheduling and the operation of public buses, marine transit means and taxis had accelerated the recovery from the Covid-19 pandemic. He stated that such measures contributed to restoring the growth of public transport ridership to 70% of the pre-Covid-19 levels. They also contributed to reducing the number of kilometres travelled by 18%, improving bus on-time arrival by 6%, and cutting carbon emissions by 34 metric tons.

“In cooperation with Alibaba Cloud, RTA has recently started trialling the ‘City Brain’ system to manage traffic in urban areas using artificial intelligence and advanced algorithms. The system analysis a massive number of big data received from nol cards, operating buses and taxis as well as the Enterprise Command and Control Centre. Then it converts the data into useful information that could be used in sending instant notifications and improving bus schedules and routes. The system is expected to improve the bus ridership by 17%, average waiting time by 10%, and the journey time and the average bus usage by 5%,” stated Al Tayer.

“In cooperation with FAMCO, RTA has recently inaugurated a remote Bus Performance Monitoring Centre Al Quoz Bus Depot, for instant tracking and monitoring the performance efficiency of RTA’s new 516 Volvo buses fitted with Telematics system. The system, which enhances the operational and maintenance processes, includes 47 types of alerts covering mechanical aspects, fuel consumption per kilometre, and the condition of the safety equipment on board. It contributed to reducing fuel consumption by 5% and supported the planning for periodic and preventive maintenance of buses. It also resulted in an efficiency-driven assessment of drivers, improved the road safety standards, and improved the rating of customer happiness,” commented RTA’s Director-General and Chairman of the Board of Executive Directors.

Oud Metha Bus Station covers an area of 9,640 square metres and consists of a ground floor, three floors and a rooftop for car parking, and has a design compatible with the public transportation system in the area. The number of riders using the station is expected to rise in future to 10,000 riders per day. The station has 9 slots for operational buses, 11 parking spaces for standby buses, 350 car parks, and racks for 23 bikes.

Al Satwa Bus Station spans an area of 11,912 square metres and consists of a ground floor, one floor and a rooftop for car parking. Currently, the station can accommodate 7,800 riders per day, and the number is expected to exceed 15,000 riders per day. The station has 15 slots for operational buses, 14 slots for standby buses, 227 car parks in addition to various facilities for providing integrated passenger services.